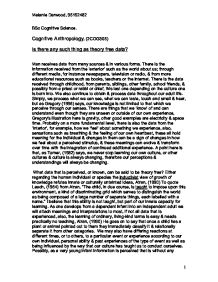 Cognitive Anthropology - Is there any such thing as theory free data?

BSc Cognitive Science. Cognitive Anthropology, (2COG305) Is there any such thing as theory free data? Man receives data from many sources & in various forms. There is the information received from the 'exterior' such as the world about us; through different media, for instance newspapers, television or radio, & from more educational resources such as books, teachers or the internet. There is the data received through childhood, from parents, siblings, other family, school friends, & possibly from a priest or rabbi or chief, this last one depending on the culture one is born into. We also continue to obtain & process data throughout our adult life. Simply, we process what we can see, what we can taste, touch and smell & hear, but as Gregory (1996) says, our knowledge is not limited to that which we perceive through our senses. There are things that we 'know' of and can understand even though they are unseen or outside of our own experience, Gregory's illustration here is gravity, other good examples are electricity & space time. Probably on a more fundamental level, there is also the data from the 'interior', for example, how we 'feel' about something we experience, also, sensations such as breathing & the feeling of our own heartbeat, these all hold meaning for the individual & changes in them can be a sign of changes in how we feel about a perceived stimulus, & these meanings can evolve & transform over time with the integration of continued additional experience. ...read more.

various alternatives, conclude which is the best of them, react to future situations before they arise, utilize the knowledge of past events in dealing with the present & future, & in every way to react in a much fuller, safer, & more competent manner to the emergencies which face it." There are many systems of symbols used by humans to represent what is understood of the surrounding environment. Language; verbal & written, & mathematics being the two most apparent, a major principle of cognitive science is that the mind is a symbolic system, that it constructs & operates on symbols. Turner, (1982) says that the role of symbols in showing connection across different levels of descriptive structures has been neglected. Also, that symbols can be said to serve as connectives between levels or parts of a system, as well as between the system & its environment. Two areas of human perception that can be used to illustrate well how data, as perceived by man, is not without attached theory, are vision & language. To quote David Marr, an authority on the theory of visual perception, "The true heart of visual perception is the inference from the structure of the real world outside." Things are normally seen automatically & with no effort. It seems that seeing things is 'easy' for our brains to do. This simplicity gives us our subjective experience of direct contact with the real world. ...read more.

says, these extremely complex rituals must have arisen & been transmitted culturally, but our facilities to use these complex structures are based on intrinsic built in mechanisms that enable our perception to have rationality based on inferencing & deduction. To return to the question, is there any such thing as theory free data? I believe the answer is no. We obtain information in many ways, in addition to that which we perceive through our senses; there are abstract concepts & 'known' facts about those things that remain unseen. This data, our brain processes & devises responses to, these responses come about from our understanding of & feeling about what we have perceived, & from the meaning we attach to it. This can vary, according to our culture, also with stage of development, & according to the individual's knowledge base, inferencing & reasoning abilities, level & scope of education & personal experience. Even as an extremely young infant, I don't believe that any data received can be said to be theory free, the structures to process, to reason, to infer & deduce are already there or developing, & all mammals are exposed to maternal influences in utero and during periods of postnatal suckling so babies, therefore, can potentially acquire information and behavioural practices from their mothers, Gibson, (2002) The very way in which we communicate data to each other is making use of a complex system of symbols that represents said data, this has evolved over time & exploits innate facilities for most importantly, survival, as well as language & learning. ...read more.