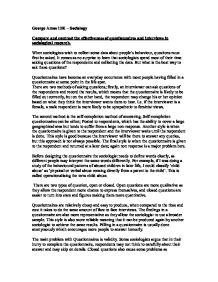 Compare and contrast the effectiveness of questionnaires and interviews in sociological research.

George Amos 12K - Sociology Compare and contrast the effectiveness of questionnaires and interviews in sociological research. When sociologists wish to collect some data about people's behaviour, questions must first be asked. It comes as no surprise to learn that sociologists spend most of their time asking questions of the respondents and collecting the data. But what is the best way to ask these questions? Questionnaires have become an everyday occurrence with most people having filled in a questionnaire at some point in the life span. There are two methods of asking questions; firstly, an interviewer can ask questions of the respondents and record the results, which means that the questionnaire is likely to be filled out correctly, but on the other hand, the respondent may change his or her opinion based on what they think the interviewer wants them to hear. I.e. if the interviewer is a female, a male respondent is more likely to be sympathetic to feminist views. ...read more.

There are two types of question, open or closed. Open questions are more qualitative as they allow the respondent more chance to express themselves, and closed questions are easier to turn into stats and figures making them more quantitative. Questionnaires are relatively cheap and easy to produce, when compared to the time and cost it takes to do the same amount of face to face interviews. The findings in a questionnaire are also more representative as they allow the sociologist to use a broader sample. This style is also more reliable meaning that it can be produced again by another sociologist to achieve the same results. Filling in a questionnaire is usually done anonymously which encourages more people to answer honestly. The main problem with Questionnaires is validity. Some sociologists argue that in their hurry to complete the questionnaire, respondents may not think to carefully about their answer and may skip on details. ...read more.