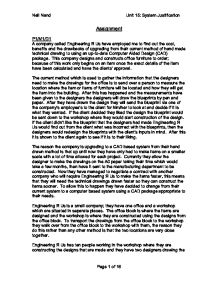 Assignment P1/M1/D1 A company called Engineering ? Us have employed me to find out the cost, benefits and the drawbacks of upgrading from their current method of hand made technical drawing to using an up-to-date Computer Aided Design (CAD) package. This company designs and constructs office furniture to order; because of this work only begins on an item once the exact details of the item have been calculated and have the clients' approval. The current method which is used to gather the information that the designers need to make the drawings for the office is to send over a person to measure the location where the item or items of furniture will be located and how they will get the item into the building. After this has happened and the measurements have been given to the designers the designers will draw the blueprints by pen and paper. After they have drawn the design they will send the blueprint via one of the company's employee's to the client for him/her to look at and decide if it is what they wanted. If the client decided they liked the design the blueprint would be sent down to the workshop where they would start construction of the design. If the client didn't like the blueprint that the designers had made Engineering ? Us would find out from the client what was incorrect with the blueprints, then the designers would redesign the blueprints with the client's inputs in mind. After this it is shown to the client again to see if it is to their liking. The reason the company is upgrading to a CAD based system from their hand drawn method is that up until now they have only had to make items on a smaller scale with a lot of time allowed for each project. Currently they allow the designer to make the drawings on the A0 paper taking their time which would take a few months, then have it sent to the manufacturing department to be constructed. ...read more.

this is that it is the latest operating system produced by Microsoft, is very stable and has advanced networking facilities built into it. The prices for this operating system will not be stated separately as the computers that I will be buying from dell have it already installed. Windows XP also already has a firewall built into it so there will be no need to buy a separate firewall application, it also has an internet browser and a word processor which can be used to viewing the help files with it so there is no need to purchase these separately. The required specifications for Windows XP Professional are shown below: Component Specification Processor Pentium 300 MHz/equivalent RAM 128MB Hard drive 1.5GB Video card Super VGA, 800 x 600 resolution Optical drive CD-ROM Pointing device Mouse Keyboard Keyboard The table below shows three different bands of software solution prices, one is for the cheapest system, the next is for a mid ranged system and the last is for the most expensive system. Low ranged band Mid ranged band High ranged band CAD application DeltaCAD TurboCAD AutoCAD Price �39.40 �1109.01 �2058 In the table above you can see the prices between the low ranged band and the high ranged band change dramatically. The change in prices is due to the quality of the product, such as all the extra features it has which cut down a lot on drawing times and its method of working which is more efficient; saving time. I will be using a cheap plotter for all of the different bands of costing which will cost �1,972.82; a downfall with this is that you can put less paper into the paper tray so the excess will have to be stored else where; which isn't a big problem. The main two problems are that, it will be a lot slower than a mid range or an expensive one and does not have as good a resolution so the drawings will not be as crisp and clear. ...read more.

Windows XP also includes a firewall which will help keep intruders out of the computer system stopping them from cause any harm to the computers. Both of these are include in the price and so not have to be purchased as extras. The reason I have chosen to use the top ranged hardware equipment out of the three different bands I had chosen is that the better hardware will allow AutoCAD to run faster, this means that the designers will be able to get their designs made faster. This will also help prevent crashes due to the hardware running out of resources which would mean that any unsaved work up to the point where the computer crashed would be lost. This could dramatically reduce the productivity if it accrued a couple of times a day. Also the budget I had been set allowed me to purchase all of this and still have money left over even when the software and training had been accounted for. The specification of the hardware that I will be using is in the table below: Component Top range Processor Pentium 4 3.0 GHz RAM 1024MB Hard drive 120GB Optical drive CD/DVD rewriter Other drive 3 1/2" floppy disc drive Operating system Windows XP Professional Keyboard Included Mouse Included A0 Plotter A0 plotter Graphics table A4 size Price �7053.94 The network equipment I used was the same for each band of price because I managed to find the correct networking equipment for the company and a cheap price which will cater to all their needs. If I had chosen more expensive equipment for the other price bands there would be no improvement in performance or reliability as their network was only going to be used lightly and for small simple tasks. The specification of the networking equipment is shown below: Component Price Cat-5E cable �3.32 NIC 10MB/100MB �29.01 Router �18.27 Total �50.60 Neil Nand Unit 15: System Justification Page 1 of 16 ...read more.