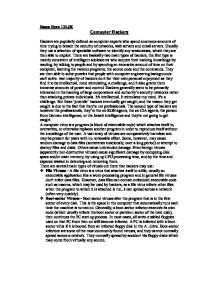 Reece Ryan 12LJK Computer Hackers Hackers are popularly defined as computer experts who spend enormous amounts of time trying to breach the security of networks, web servers and email servers. Usually they use a selection of specialist software to identify any weaknesses, which they are then able to exploit. There are basically two main types of hackers, the first type is mainly consistent of intelligent adolescents who acquire their hacking knowledge by reading, by talking to people and by spending an excessive amount of time on their computer, learning the various programs, the source code and the commands. They are then able to solve puzzles that people with computer engineering backgrounds can't solve. vast majority of hackers do it for their own personal enjoyment as they find it to be intellectual, mind stimulating, a challenge, and it also grants them immense amounts of power and control. Hackers generally seem to be primarily interested in the hacking of large corporations and authority's security networks rather than attacking private individuals. It's intellectual. It stimulates my mind. ...read more.

However, data files can contain embedded executable code such as macros, which may be used by hackers, as a file virus infects other files when the program to which it is attached is run, it can spread across a network (often very quickly). * Boot-sector Viruses - Boot sector viruses alter the program that is in the first sector of every disk. This is the space in the computer that automatically runs each time the machine is turned on. Generally, a boot-sector infector executes its own code (which usually infects the boot sector or partition sector of the hard disk), then continues the PC start-up process. In most cases, all write-enabled floppies used on that PC from then on will become infected. A PC is infected with a boot-sector virus if it is booted from an infected floppy disk in the A: drive. Boot-sector infectors are some of the most commonly found viruses, and they cannot normally spread across a network. They normally spread by accident via floppy disks which may come from virtually any source. ...read more.

and thankfully people who are working for things like organized crime, or in terrorist groups, don't posses that type of skill set at this point. The major vulnerabilities are in the Microsoft products. Microsoft has a web server out that has 15 or 20 fairly large security problems with it. There have been three or four really major ones over the last couple of years. This is because there are a lot of programs available that one could just download, run, and it'll re-write a web page for you. One such program gives you full access to a remote web server in about four seconds. There's another one that will completely shut down the web servers in a second. There are all kinds of tools out there that these people can download and they don't have to understand how they work. In order to help prevent hackers and viruses destroying data the following measures should be taken: 1. Hard Drive & System Privacy- e.g. Windows Washer 2. Internet Access Control (Software and Hardware Firewalls) e.g. Zone Alarm 3. Spyware' Protection & Prevention e.g. SpyBot S&D, Ad-aware 4. Virus Protection & Prevention e.g. Norton AntiVirus ...read more.