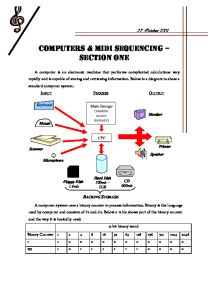 Computers & MIDI Sequencing - Section One A computer is an electronic machine that performs complicated calculations very rapidly and is capable of storing and retrieving information. Below is a diagram to show a standard computer system: INPUT PROCESS OUTPUT A computer system uses a binary counter to process information. Binary is the language used by computer and consists of 1's and 0's. Below a table shows part of the binary counter and the way it is basically used: 12 bit binary word Binary Counter 1 2 4 8 16 32 64 128 256 512 1024 2048 1 1 0 0 0 0 0 0 0 0 0 0 0 253 1 0 1 1 1 1 1 1 0 0 0 0 When a computer is switched on, many processes are initiated before you begin to give the computer any commands. First the bios is operated which is part of the motherboard and basically says 'I'm alive'. The rest of the motherboard then comes to life starting with DOS which is a program that recognizes what is connected to the computer, the operating system which includes the GUI (Graphic User Interface) and of course the ROM and RAM memory. What is MIDI? MIDI stands for Musical Instrument Digital Interface. Mostly, MIDI is an extensive set of "musical commands" which electronic instruments use to control each other. ...read more.

We call this 'daisy-chaining' instruments. Daisy-chained instruments don't always have to play in unison either. Each can play its own, individual musical part even though all of the MIDI messages controlling those daisy-chained instruments pass through each instrument. How is this possible? There are 16 MIDI "channels". For example, that MIDI message for the middle C note can be sent on channel 1. Or, it can be sent on channel 2, etc. Why use MIDI? There are two main advantages of MIDI - it's an easily manipulated form of data, and also it produces relatively small data files. Because MIDI is a digital signal, it's very easy to interface electronic instruments to computers, and then do things with that MIDI data on the computer with software. For example, software can store MIDI messages to the computer's disk drive. Also, the software can playback MIDI messages upon all 16 channels with the same rhythms as the human who originally caused the instruments to generate those messages. So, a musician can digitally record his musical performance and store it on the computer. He does this by "recording" the MIDI OUT of all of his instruments. Remember that the MIDI messages for all of those instruments go over one run of cables, so if you put the computer at the end, it "hears" the messages from all instruments over just one incoming cable. ...read more.

It thereby frees the composer from scheduling problems, and allows him more opportunity to audition his composition during the composition process, which provides invaluable feedback to aid in composition. It also makes it easier for composers to hear difficult-to-execute music. It is often easier to have a computer play a difficult performance than it is to find a musician capable of playing that performance. Likewise, it is often easier to have a computer play esoteric music (i.e. unusual instrumentation) than find musicians who have appropriate skills and the desire to play that music. MIDI sequencing allows for more efficient recording sessions by improving the process of correcting mistakes in the recording, and streamlining the recording process itself. They eliminate the need to have an engineer with special skills, as the computer takes over some of those functions, such as "punching in" overdubs. And they also offer efficient ways to make useful changes, such as transposing key. There would be no way for professional recordings to be made on a budget, in small, "home" environments that don't require things like special soundproofing without the use of MIDI. Furthermore, the technology in computer audio often eliminates expensive, time-consuming tasks, such as tuning drum kits and placing microphones and cables. The storage capacity of computers also makes recalling a given setup very efficient and inexpensive, which is important since often a setup needs to be recalled during multiple sessions. ?? ?? ?? ?? ...read more.