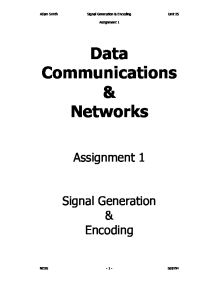 Data Communications & Networks Assignment 1 Signal Generation & Encoding Contents Page Task 1 a Page 3 b Page 4 c Page 4 d Page 5 Task 2 a Page 6 b Page 7 What is signalling? Signalling is a term used for the use of data being transmitted or carried across a medium for example in a network this could be a cat 5 cable. There has to be a way also for the receiver to interpret the data being sent and this is controlled by what's called "encoding" however the word "modulation" also means the same thing. The signal that is sent it modified in a way for it to signify data. There are different types of transmission methods which differ from what type of medium you are using for example cables or wireless - there are four which are listed below: 1. Electrical - uses your cables to transport data between nodes 2. Radio Waves - this would be your wireless networks and could also include Bluetooth devices. 3. Light - this would use fibre optic cabling to send high speeds of data 4. Microwave Analogue & Digital Signalling There are two different types of signalling and these can be done in Analogue which means it changes all time in both amplitude and frequency. ...read more.

http://moodle.derby-college.ac.uk/mod/resource/view.php?id=2346 Digital With digital signalling there are no in betweens like there in analogue its simply either 1 or 0, digital represents separate states and the change between these are practically unnoticeable. http://moodle.derby-college.ac.uk/mod/resource/view.php?id=2346 Asynchronous Transmission Asynchronous transmission is when signals are not sent at regular intervals. A good example of this would be a user using a keyboard attached to a computer. The characters are sent irregularly however the bits must be sent at known intervals. This is done by having accurate clocks at both ends of the link. The receiving clock starts when it receives the first bit from the transmitter, this is also known as the start bit. The receiver then expects to receive a known number of bits every tick of the clock. When it has received these bits the clock may stop; the last bit is known as the stop bit. Synchronous Transmission However when large volumes of data are to be transferred, the waste of the stop and stop bits with every character means that asynchronous transmission is not an efficient method. With high-speed devices, and buffered low-speed devices, data can be transmitted in large, timed, synchronous blocks. The clocks, in the receiver and transmitter, are kept synchronised by sending regular groups of special characters called SYN characters. ...read more.

This is a process that the data needs to have done to it before the computer can understand it and process it. There are different types of encoding which are * Manchester Encoding is a data communications line code which provides a way of encoding binary data sequences. Each bit is related to by at least one voltage level transition. Manchester encoding is said to be self clocking this means that synchronisation of a data stream is possible. * Huffman Encoding is another algorithm used for data compression; the coding uses a specific method for choosing the representation for each symbol. * Unipolar Encoding This type of encoding has 2 voltage states, one of these states is zero and because of this its also know as Return to Zero (RTZ) Unipolar encoding is used in computers & logic and an example of where its used in computers is the TTL logic. * Polar Encoding Polar encoding is when the digital encoding is on a level with zero volts for example the RS232 standard interface uses Polar encoding and unlike Unipolar the value doesn't return to zero, its either a positive or negative voltage. With polar encoding it reduces most of the residual DC problem. ?? ?? ?? ?? Adam Smith Signal Generation & Encoding Unit 25 Assignment 1 ND2G - 1 - 508794 ...read more.