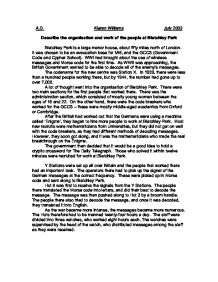 Describe the organisation and work of the people at Bletchley Park.

A.D. Kieran Williams July 2003 Describe the organisation and work of the people at Bletchley Park Bletchley Park is a large manor house, about fifty miles north of London. It was chosen to be an evacuation base for MI6, and the GCCS (Government Code and Cypher School). WWI had brought about the use of wireless messages and Morse code for the first time. As WWII was approaching, the British Government wanted to be able to decode all of the enemy's messages. The codename for the new centre was Station X. ...read more.

On the other hand, there were the code breakers who worked for the GCCS - these were mostly middle-aged academics from Oxford or Cambridge. After the British had worked out that the Germans were using a machine called 'Enigma', they began to hire more people to work at Bletchley Park. Most new recruits were mathematicians from Universities, but they did not get on well with the code breakers, as they had different methods of decoding messages. However, they soon got along, and it was the mathematicians who made the real breakthrough on the Enigma. ...read more.

The people there translated the Morse code into letters, and did their best to decode the message. The message was then pushed along to Hut 3 by a broom handle. The people there also tried to decode the message, and once it was decoded, they translated it into English. As the war became more intense, the messages became more numerous. The Huts therefore had to be manned twenty-four hours a day. The staff were divided into three watches, who worked eight hours each. The watches were supervised by the head of the watch, who distributed messages among the staff as they were received. ...read more.