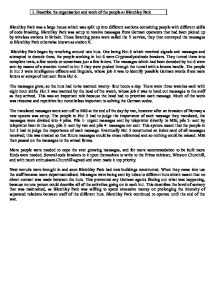 Describe the organisation and work of the people at Bletchley Park

1. Describe the organisation and work of the people at Bletchley Park Bletchley Park was a large house which was split up into different sections containing people with different skills of code breaking. Bletchley Park was setup to receive messages from German operators that had been picked up by wireless stations in Britain. These listening posts were called the Y service, they then conveyed the messages to Bletchley Park otherwise known as station X. Bletchley Park began by revolving around two huts. One being Hut 6 which received signals and messages and attempted to decode them, the people working in hut 6 were Cryptanalysts/code breakers. They turned them into complete texts, a few words or sometimes just a few letters. ...read more.

There were three watches each with eight hour shifts. Hut 3 was manned by the head of the watch, whose job it was to hand out messages to the staff as they arrived. This was an important role because the head had to prioritize each message. Much of the work was tiresome and repetitive but nonetheless important to solving the German codes. The translated messages were sent off to MI6 at the end of the day by van, however after an invasion of Norway a new system was setup. The people in Hut 3 had to judge the importance of each message they translated, the messages were divided into 4 piles. ...read more.

Several code breakers to it upon themselves to write to the Prime minister, Winston Churchill, and with much enthusiasm Churchill agreed and even made it top priority. New recruits were brought in and soon Bletchley Park had new buildings constructed. When they came into use the staff became more departmentalised. Messages were being sent by tubes to different huts which meant that no direct contact was made between the huts. This prevented any German agents finding out what was happening, because no one person could describe all of the activities going on in each hut. This describes the level of secrecy that was maintained, as Bletchley Park was willing to spend excessive money on prolonging the intensity of separated relations between staff of the different huts. Bletchley Park continued to operate until the end of the war. ...read more.