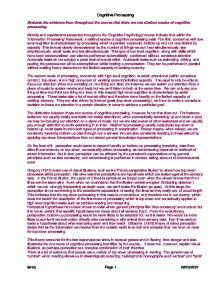 Evaluate the evidence from throughout the course that there are two distinct modes of cognitive processing.

Evaluate the evidence from throughout the course that there are two distinct modes of cognitive processing. Models and experiments presented throughout the 'Cognitive Psychology' course indicate that within the 'Information Processing' framework, 2 distinct modes of cognitive processing exist. The first, concerned with low level cognition is characterised by processing which is parallel, automatic, bottom-up and not very limited by capacity. This is most clearly demonstrated by the number of things we can hear simultaneously, see simultaneously, smell, taste and feel simultaneously. This type of low level cognition, along with skills which have been proceduralised, can also be performed automatically; performed without conscious attention. Automatic tasks do not employ a great deal of mental effort. Automatic tasks such as swimming, driving, and peeling the potatoes can all be accomplished whilst holding a conversation. They can be performed in parallel without making heavy demands on the limited capacity of working memory. The second mode of processing, concerned with high-level cognition, is serial, attentional (within conscious control ), top-down, and a high consumer of working memory's limited capacity. It is usual to only be able to focus our attention (from one modality) on one thing at a time, for instance we can switch our attention from a piece of music to spoken words and back but we can't listen to both at the same time. ...read more.

and is conscious although some words are read automatically. A.F. Healy (1976) showed with her automatic recognition tests that subjects who were asked to circle all the letter 'T's on a page, often missed out the 'T' in the word 'The". The reading of the word 'The' was so automatic (it is one of the most common words in our language) that the reading of it could not be modified into single letter recognition. The 2 modes of cognitive processing are not then, distinct, when performing a reading task. The 2 modes of processing have been accounted for at levels of explanation higher than the topic-related theories discussed so far, three cognitive architectures have also been introduced, namely the Schema based architecture, the Production system architecture ACT* and the PDP architecture. An architecture is midway between a framework which is a general set of ideas at a high level, and a theory which is specific to an area within the framework and is both predictive and falsifiable. An architecture can also make predictions but is broader than a theory and tries to provide theoretical integration. Whereas both schema based and production system architectures are rule based, PDP reacts to stimuli by activating a pattern of strength across connections. ...read more.

Attentional tasks on the other hand, do not involve a great deal of training, it would not take long to show someone how to count out all the coins from a jar and arrange them in equal piles, but it would not be possible to perform any other tasks at the same time. The last characteristic described by Shiffrin & Schneider was that of consciousness. Although there are several differences between automatic and attentional processing, this is the characteristic that is probably the most easily identified. Attentional tasks are those we are consciously aware of doing. We are conscious of paying attention to that task and if our attention is attracted away, then processing of that task stops. Automatic processing is largely unconscious; we can drive a familiar route and arrive without having been conscious of the journey. The 2 modes of processing then, have been shown to exist, but they are not always distinct, rather they exist at either end of a dimension with lots of variation in between. It has been useful, however, to draw the distinction between the 2 extreme types of cognitive processing for clarity. Mode 1 describes the typical characteristics of conscious processing and mode 2 describes the typical characteristics of unconscious processing but in reality there is a complex relationship and interaction between the two. Cognitive Processing Linda Healy Page 1 08/05/2007 ...read more.