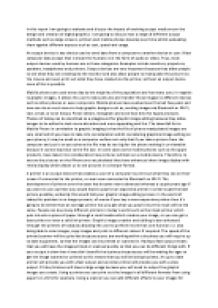 Transfer-Encoding: chunked ﻿In this report I am going to evaluate and discuss the impact of evolving output mediums on the design and creation of digital graphics. I am going to discuss how a range of different output methods such as large screens, printers and mobile phones develop over time whilst evaluating them against different aspects such as cost, speed and usage. An output device is any device used to send data from a computer to another device or user. Most computer data output that is meant for humans is in the form of audio or video. Thus, most output devices used by humans are in these categories. Examples include monitors, projectors, speakers, headphones and printers. Output devices are very important because they allow people to see what they are creating via the monitor and also allow people to manipulate the picture via the mouse and even print out what they have created via the printer, without an output device none of this is possible. Mobile phones are used every day by the majority of the population and has many uses. In regards to graphic images, it allows the user to take pictures and transfer these images to different devices such as other phones or even computers. Mobile phones have evolved over the last few years and now can do so much more to help graphic designs such as, ...read more.

Graphic image creation and editing is also enhanced through the printers of today by allowing the user to perform more than one function i.e. also being able to scan images, copy images and print in different colours if required. The speed of the printer/scanner will be quite fast because as you are working within a business you will require up to date equipment, so that the images can be printed or scanned in. Having a fast output means that you will have the image printed or scanned quickly so that you can do different things with. If your output is slow then it wouldn?t benefit the business because you will be waiting for ages to get the image scanned or printed so this means that you will be losing business. An up to date printer will provide you with a fast output and an older printer will provide you with a slow output. Printer/scanner will have a large usage because you will need to output the graphic images you create. Using a printer you can print out the images in all different formats from using paper to t-shirts for example. Using a scanner you can add different effects to your images for example you can draw the logo free hand and then scan it into the computer and edit the logo using a graphical application. ...read more.

The speed of the monitor will be quite fast as the CPU will send the instructions to the screen and allow you to see the end product. The output will need to be fast because if you are working within a business like in this scenario you are working for a graphics company you will require the speed to be fast because you don’t want to be working with a slow computer waiting for it too load. Using an up to date monitor will take a matter of seconds to load an image to the screen but if you are using an older screen you will take longer to load an image up. Large monitors will have a large usage because as you are a business within the graphics industry and you will require editing images to a client’s needs. Using a large monitor screen will allow you to do this as you will have a larger area to zoom in and add the effects to the images. Without a screen you won’t be able to edit images because you won’t be able to see the output of the image. Monitors are an essential part of the business and you can get them for around £50 depending how on large and the amount of features within the monitor. I recommend that you use a large monitor as it will allow you to see the images a lot clearer than using a smaller screen. ...read more.