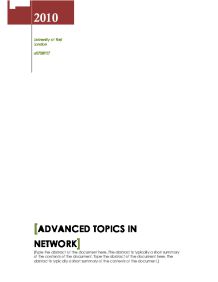 For this report I will be research about the different virtualization technologies available and how they are used. I chose this because I would like to know gain a better understanding of how this technology is implemented and how it benefits users. I wi

According to Golden (2007, pp.24) "Hardware emulation is a powerful virtualization technology because it performs the guest OS modifications at runtime through a technique known as binary translation". This therefore means that when the guest operating system is installed the requests need to be sent to the hypervisor instead of the physical hardware to achieve this the hypervisor has to modify the internal software of the guest operating system this is binary translation. Wolf (2005) suggests that hardware emulation is mostly used "re-creating hardware that no longer exists, sharing expensive resources and porting software to different computer system architectures". The figure below shows how the physical hardware of a system would be replicated and utilised in hardware emulation. As the diagram shows there are 2 sets of virtual machines created and each of them have got a copy of the underlying hardware where an operating system can be installed and then various applications. http://www.cornerstone.it/solutions_server.php Para-virtualisation Golden (2007) states that Paravirtualisation is a type of server virtualisation, instead of emulating the entire hardware environment, there is a layer of virtualisation software that "coordinates" requests from the guest operating system to the physical hardware. With paravirtualisation multiple operating systems can run on the system hardware because the resources are being used more efficiently. ...read more.

There are different types of virtualisation in the cloud as stated by Gillam (2010) these are storage, network and server virtualisation. A type of server virtualisation would be to map one physical resource to multiple partitions. According to Gillam (2010) "virtualisation is extremely well suited to a dynamic cloud infrastructure because it provides important advantages in sharing, manageability and isolation". Many businesses will view cloud computing as a different way to use IT. This could lead to a change of original IT roles in the future so that the full power of computing can be utilised through cloud computing. Conclusion From this research report I have managed to gain an insight of the different virtualisation techniques that are available to use. Each of which have their own benefits and drawbacks for example although the performance of a paravirtualised system is better than a hardware emulation the choices of operating systems are limited because they need to be modified. I have also have also seen how virtualisation and cloud computing are closely related and how important they are to each other. Overall I believe that virtualization and cloud computing are essential IT because it allows businesses achieve greater capabilities and to easily increase capacity whilst not having to worry about buying new hardware or even new licences. ...read more.