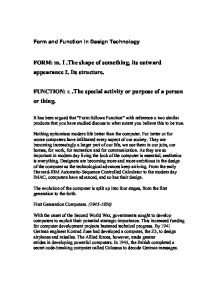 Form and Function In Design Technology

Form and Function in Design Technology FORM: m. I .The shape of something, its outward appearance 2. Its structure. FUNCTION: it. .The special activity or purpose of a person or thing. It has been argued that "Form follows Function" with reference o two similar products that you have studied discuss to what extent you believe this to be true. Nothing epitomises modern life better than the computer. For better or for worse computers have infiltrated every aspect of our society. They are becoming increasingly a larger part of our life, we use them in our jobs, our homes, for work, for recreation and for communication. As they are so important in modem day living the look of the computer is essential, aesthetics is everything. Designers are becoming more and more ambitious in the design of the computer as the technological advances keep arriving. From the early Harvard-IBM Automatic-Sequence Controlled Calculator to the modem day IMAC, computers have advanced, and so has their design. The evolution of the computer is split up into four stages, from the first generation to the forth. First Generation Computers. (1945-1956) With the onset of the Second World War, governments sought to develop computers to exploit their potential strategic importance. ...read more.

They also contained all the components we associate with the modem day computer: printers, tape storage, disk storage, memory, operating systems, and stored programs. One important example was the IBM 1401, which was universally accepted throughout industry, and is considered by many to be the Model T of the computer industiy. By 19(5, most large business routinely processed financial information using second generation computers. Second generation computers were the first to be cost effective and productive for business use. The stored program concept meant that instructions to run a computer for a specific function (known as a program) were held inside the computer's memory, and could quickly be replaced by a different set of instructions for a di fTerent function. A computer could print customer invoices andl minutes later design products or calculate paychecks. Third Generation Computers (1964-1971) Though transistors were clearly an improvement over the vacuum tube, they still generated a great deal of heat, which damaged the computer's sensitive internal parts. The quartz rock eliminated this problem. Jack Kilby, an engineer with Texas Instruments, dleveloped the integrated circuit (IC) in 1958. The IC combined three electronic components onto a small silicon disc, which was made from quartz. Scientists later managed to fit even more components on a single chip, called a semiconductor. ...read more.

With the iMac, Apple has redefined a computer's form, while making sure people could still recognise it as a computer. From first impressions, the thing that will strike you most about the iMac is the all-in-one monitor and computer design, although this is not new. Infact, this is a hallmark design feature of Apple going back to the first Macintosh in 1984. In the creation of the iMac, ives took a historic form and brought it into the modern day. The iMac is governed by what the consumers want, and that is perhaps why it becamee so successful. Firstly people wanted a smaller and more portable computer, especially in Europe and Asia where living spaces are smaller. The handle on the back of the machine invites people to pick it up and touch it and the few cables that connect to the machine make it easier to set up and avoid the need for complicated documentation. They have designed it in a simple and elegant way, this was to try and make people less afraid of computers, they wanted the iMac to be "approachable" "The idea that the i2vlac comes in one box, has clear plastic that catches the light and shows its changing nature and has a shape that looks like it just arrived all contribute to the overall approachability and appeal of the machine. ...read more.