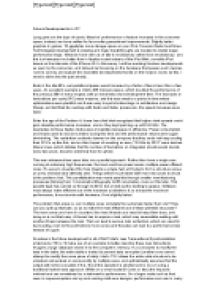 ﻿[Type text][Type text][Type text] Future Developments in ICT Long gone are the days of yearly ?Massive? performance or feature increases in the consumer space, instead, we have settled for far smaller generational improvements: Slightly better graphics in games, 10 gigabytes more storage space on your iPod, 5 second faster boot times. Technological development is slowing and major breakthroughs are needed to enable larger performance leaps. What we have seen as of late is evolutionary rather than revolutionary, and this is showcased no better than in Apples recent release of the iPad Mini; a smaller iPad based on the internals of the iPhone 4S. In this essay, I will be avoiding frivolous developments as seen by the consumer, and instead be focussing on the hardware that powers such devices, I aim to convey and explain the incredible developments that lie on the horizon, but to do this, I need to delve into the past shortly? Back in the late 80?s, computational power would increase by a factor of two in less than a few years. An excellent example is Intel?s 486 microprocessor, which doubled the performance of the previous 386 in every respect, with an extremely short development time. ...read more.

Graphene is an atom thick layer of carbon, which has exceptional electrical properties; the electrons are able to travel far faster in this substrate than in silicon, which will help to reduce latencies and dramatically speed up chips, with minimal changes to design. IBM graphene transistors are said to have a cut-off frequency of 155 Ghz, which would allow unparalleled performance increases (Up to 30x-40x) if cooling can keep up. A graphene transistor has recently been demonstrated that is only 1 atom thick and 10 atoms wide, allowing for the same improvements previously detailed. Whilst the processors powering the next generation of devices will be extremely powerful, running millions of operations per second, the supporting infrastructure around it must be able to keep it fed with data at the same rate; the slowest part of todays computers being the storage subsystem. Whilst every other part in the computer has no or very little mechanical reliance, the hard disk has remained slow and unchanged for over 30 years. It seems silly that instructions are ultimately read from a disk spinning at only 5400 revolutions per minute via a magnetic head moved slowly over it. ...read more.

Quantum entanglement is currently being studied and put forth as a solution to this problem; in quantum physics, if you apply an outside force to two atoms, it can cause them to become entangled, and the second atom can take on the properties of the first atom. So if left alone, an atom will spin in all directions. The instant it is disturbed it chooses one spin, or one value; and at the same time, the second entangled atom will choose an opposite spin, or value. This allows scientists to know the value of the qubits without actually looking at them. [1] http://www.howstuffworks.com/quantum-computer.htm Hopefully with the introduction of these new parts over the coming years, we will begin to see major scientific developments come through to help explain the world around us. This is of course, the most useful application of ICT in today?s world (rather than the cash cow pit that is consumer electronics). Such advances could help to cure cancer and run simulations that one day will result in no world hunger, and the sooner we have this technology in our hands, the faster we can work towards a better future. The irony of today?s situation is that, the supercomputers running the simulations on global warming today, consume far more electricity in the process than their results could ever justify. I hope that changes, and soon. ...read more.