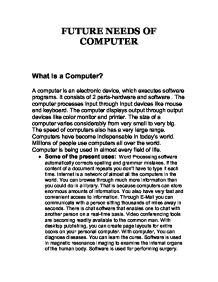 FUTURE NEEDS OF COMPUTER What is a Computer? A computer is an electronic device, which executes software programs. It consists of 2 parts-hardware and software . The computer processes input through input devices like mouse and keyboard. The computer displays output through output devices like color monitor and printer. The size of a computer varies considerably from very small to very big. The speed of computers also has a very large range. Computers have become indispensable in today's world. Millions of people use computers all over the world. Computer is being used in almost every field of life. * Some of the present uses: Word Processing software automatically corrects spelling and grammar mistakes. If the content of a document repeats you don't have to type it each time. Internet is a network of almost all the computers in the world. You can browse through much more information than you could do in a library. That is because computers can store enormous amounts of information. You also have very fast and convenient access to information. Through E-Mail you can communicate with a person sitting thousands of miles away in seconds. ...read more.

In the past twenty years, there has been a dramatic increase in the processing speed of computers, network capacity and the speed of the internet. These advances have paved the way for the revolution of fields such as quantum physics, artificial intelligence and nanotechnology. These advances will have a profound effect on the way we live and work, the virtual reality we see in movies like the Matrix, may actually come true in the next decade or so. * Future needs of computer in anesthesia: Computers are beginning to appear in the operating room and in intense care units (ICU). At this time most computers are reserved for the complex cases. However, we still need to discern what role the computer could play in the future, for routine cases. An outline of conceivable integrated computerized system in anesthesia is presented. Computer enthusiasts tend to suggest that computers are particularly helpful in complicated cases where many variables must be monitored, interpreted and charted. These enthusiasts may be correct. But computer is likely to establish a secure place in the operating room only after it has proven its value in average, routine, uncomplicated case. ...read more.

Few months back, Engineers were able to develop a car that allows the blind to drive. The vehicles was developed from scratch with $1300 based on an ATV. Blind groups all over compared this success to the moon landing landing for the BLIND. The objective of the competition was not to be just another autonomous vehicle like the competitions for DARPA (Defense Advanced Research Projects Agency). Instead this would actually allow the blind driver to be planning and making his own choices in a drive. The nine person design team called Virginia Tech's Robotics & Mechanisms Laboratory created the vehicle. A laser sensor in front of the car scans the area for obstacles and then sends signals to a computer in the back of the buggy which sends voice instructions to the blind driver in terms of how many "clicks" the driver should turn the steering wheel. In addition, the computer vibrates the left side of the blind driver's vest to instruct the driver to slow down and both sides to instruct the driver to stop. This car would soon be introduced in the market where everyone colud easily approach it. It is a blast in the world of handicap people. There are a lot more needs of computer for future which cannot be summarise in such a short period of time. ...read more.