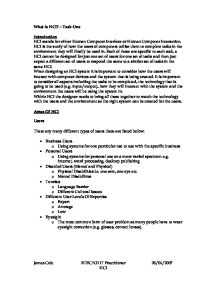 What Is HCI? - Task One Introduction HCI stands for either Human Computer Interface or Human Computer Interaction. HCI is the study of how the users of computers utilise them to complete tasks in the environment they will finally be used in. Each of these are specific to each task, a HCI cannot be designed for just one set of users for one set of tasks and then just expect a different set of users to respond the same to a similar set of tasks in the same HCI. When designing an HCI system it is important to consider how the users will interact with computer devices and the system that is being created. It is important to consider all aspects including the tasks to be completed, the technology that is going to be used (e.g. input/output), how they will interact with the system and the environment the users will be using the system in. Within HCI the designer needs to bring all these together to match the technology with the users and the environment so the right system can be created for the users. ...read more.

Instead of using a device such as a mouse or tracker ball, you can use your finger to point to objects on the screen. Touch screens provide a natural interface for users with limited knowledge. Most users find touch screens tiring to the arms after long use. Mouse A device that controls the movement of the cursor or pointer on a display screen. A mouse is a small hand shaped item you can roll along a hard, flat surface. Its name is comes from its shape, which looks a bit like a mouse, its wire you can imagine to be the mouse's tail, and the fact that the user must make it scurry along a surface. As you move the mouse, the pointer on the display screen moves in the same direction. Mice contain at least one button and sometimes as many as three. Some newer mice also include a scroll wheel for scrolling through long documents. Monitor Another term for display screen. The term monitor usually refers to the entire box, where display screen can mean just the screen, but also the term monitor often means the box has graphics capabilities. ...read more.

type in name and address. Environment This is where the system will be used, this could be: * In a Home Environment (e.g. checkout on a website) * In a Office Environment (e.g. sales order processing program) * On a Street (e.g. handheld pc with questionnaire program on it) The way the system is designed could also be based on: * Temperature of the environment - should be around 21 degrees. * Lighting - should be overhead lighting of satisfactory light level. * Surroundings - background noise of offices such as noisy CPU fans and printers constantly going can add to stress levels. Legal Issues There are many legal issues surrounding working with computers, these include: * Display Screen - not sitting too close, at a satisfactory resolution * Data Protection - keeping personal details (names, addresses, credit details) safe and secure with the use of firewalls and passwords * Ergonomics - making sure that the user and the computer are aligned correctly not to cause strain to the user * Software Design - make sure that the software has not been designed before and copyrighted. Examples of HCI's * GUI Systems - Windows And Linux * Virtual Reality - Mostly Gaming * Flight Simulators James Cole BTEC ND IT Practitioner 28/04/2007 HCI ...read more.