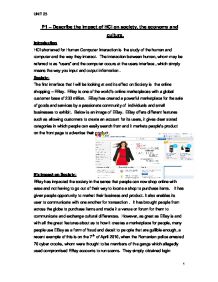 HCI shortened for Human Computer Interaction is the study of the human and computer and the way they interact. The interaction between human, whom may be referred to as users and the computer occurs at the users interface

P1 - Describe the impact of HCI on society, the economy and culture. Introduction HCI shortened for Human Computer Interaction is the study of the human and computer and the way they interact. The interaction between human, whom may be referred to as "users" and the computer occurs at the users interface, which simply means the way you input and output information. Society; The first interface that I will be looking at and its effect on Society is the online shopping - EBay. EBay is one of the world's online marketplaces with a global customer base of 233 million. EBay has created a powerful marketplace for the sale of goods and services by a passionate community of individuals and small businesses to exhibit. Below is an image of EBay. EBay offers different features such as allowing customers to create an account for its users, it gives clear stated categories in which people can easily search from and it markets people's product on the front page to advertise their product. It's impact on Society; EBay has impacted the society in the sense that people can now shop online with ease and not having to go out of their way to locate a shop to purchase items. It has given people opportunity to market their business and product. It also enables its user to communicate with one another for transaction. It has brought people from across the globe to purchase items and made it a venue or forum for them to communicate and exchange cultural differences. ...read more.

The three paired colours are 'red-green', 'yellow-blue' and 'black-white' which are used to get the best designs as it can help when using colour on the interface. o Pop-out effect: The pop-out effect is use to outline a subtle change in things, to make it stand out with a subtle non-eye affecting colour to highlight an indication. For example; if you take the Microsoft office word for an example, when you want to make a change on the task bar at the topic that gives you the categorised options, it has background yellow colour behind it, which is to indicate that you are about to click on it to change. * Patterns: Pattern is the template or layout in which is needs to include familiarity, consistency, and evenness. It simply enables the users to be able to interact or relates to the interface, which makes it more user-friendly. Pattern perception has sets of laws which are to be followed for designs; proximity, continuity, symmetry, similarity and the common grouping; fate, region and connected. o Proximity: how we view things that are close together as a group. o Continuity: are smooth continuous lines that are easy to interpret than of a rapid often changing line. o Symmetry: that we see symmetrical shapes easily than an unsymmetrical. o Similarity: in groups, we tend to see similar objects as oppose to seeing subjects that are un-similar as an individual. ...read more.

M1 - Explain how an HCI could be adjusted for specialist needs Children; For my first HCI, in order to make it more accessible and applicable to children, I will I have to make it less complicated by using different colours to grab their attention and the words would be something easy and understand for them. Have fewer pages in order to make it quicker for them to access what they have searched for. Also have images or small animations on the page that could be a helping guide for them, which they could click on when they are stuck or in need of anything. For example on the Microsoft office word there was a help wizard which you can change into an animal if you did not want the wizard. Visually impaired; In regard to improving my HCI for the visually impaired, I could create a button in which would change the colour on the screen to make it easier for them to see the colour on the computer. I could also have a button that could enlarge the text on the screen for them. Second HCI: Children; For my second HCI, to make it accessible for children, I would have to improve on the colour from just being green and dull and include more bright colours as this would keep them engaged and still use the interface, Another adjustments that I could also make is give a description of what the products are and what they do, I will have to do this in the most simplest form possible. ...read more.

The last question regarding HCI in specialist needs situations ...

The last question regarding HCI in specialist needs situations could have been developed much further and it is this question that lets the work down.

The first two sections are basic fact finding questions without the need for further development or in-depth original thinking.

The final question requires greater analysis. Instead of giving an assessment of needs for both the user and the interface, the student has simply included a sentence to solve the problem. An analysis would have given the student stronger answers and would have provided the opportunity to really show an understanding of the needs of children and visually impaired users.

The quality of writing is okay but there are some basic mistakes in style, grammar and punctuation. There are also words missing from some sentences. The student would be advised to proofread their work to avoid these simple mistakes.