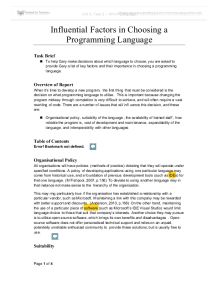 Influential Factors in Choosing a Programming Language Task Brief * To help Gary make decisions about which language to choose, you are asked to provide Gary a list of key factors and their importance in choosing a programming language. Overview of Report When it's time to develop a new program, the first thing that must be considered is the decision on what programming language to utilise. This is important because changing the program midway through completion is very difficult to achieve, and will often require a vast rewriting of code. There are a number of issues that will influence this decision, and these are: * Organisational policy, suitability of the language, the availability of trained staff, how reliable the program is, cost of development and maintenance, expandability of the language, and interoperability with other languages Table of Contents Task Brief 1 Overview of Report 1 Organisational Policy 1 Suitability 2 Availability of Trained Staff 2 Reliability 2 Development and Maintenance Costs 2 Expandability 3 Interoperability 3 Summery 3 Bibliography 4 Organisational Policy All organisations will have policies (methods of practice) dictating that they will operate under specified conditions. A policy of developing applications using one particular language may come from historical use, and a foundation of previous development tools (such as IDEs) for that one language. ...read more.

Therefore, choosing a popular language will make it easier to recruit personnel for a new project. Also, looking at what languages the organisation has historically used, the kind of hardware installed, and what skill sets existing employees have will have an impact in this decision. Reliability A program becomes unreliable when how it will deal with data becomes unpredictable, and this is what can cause programs to crash. This is why some languages, like Ada, are created with an emphasis on features that make them less likely to crash. (Anderson, 2010, p.166) The best way of ensuring that code is predictable and reliable is to use a strict language, which is one with a strong type system. A strong type system specifies restrictions on how values of different data types (such as integers and strings) are allowed to be intermixed, and stops the source code from compiling if it thinks data is being incorrectly mixed. This provides a guarantee about how the program will behave when it starts running. (Wikipedia 2, 2011) Development and Maintenance Costs Part of the idea of planning the development of a program also includes the costing of the entire project. In order to do so, we take into account the length of time each development stage will take, and what resources will be needed at which point. ...read more.

Summery In this report, we discussed what factors are influential in choosing a programming language for a project. We discovered that companies will have organisational policies which restrict employees to only use certain languages or certain company's' software. We also learned that all languages have pros and cons, so that understanding what task our program needs to do will ensure we pick the language that is most suitable. We also need to make sure that there are actually people available to employ to code for us, so we should choose a popular language to make it easier to recruit employees. Reliability is also an area of importance, but for programs where reliability must be guaranteed, we learned that there are languages such as Ada which cater to this specific requirement. Budgets are also an issue as development and maintenance costs will differ between languages, and an unreliable solution means more money spent in maintenance costs. If we need our software to be expanded in the future, it is also best to choose a language that can support this from the start. Finally, we learned about interoperability and how programs coded in different languages are able to work with each other through a common set of standards. ...read more.