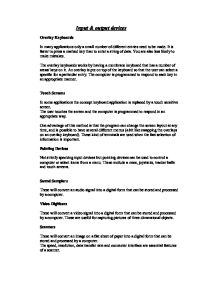 Input & output devices Overlay Keyboards In many applications only a small number of different entries need to be made. It is faster to press a marked key than to enter a string of data. You are also less likely to make mistakes. The overlay keyboards works by having a membrane keyboard that has a number of areas/ keys on it. An overlay is put on top of the keyboard so that the user can select a specific for a particular entry. The computer is programmed to respond to each key in an appropriate manner. Touch Screens In some applications the concept keyboard application is replaced by a touch sensitive screen. The user touches the screen and the computer is programmed to respond in an appropriate way. One advantage of this method is that the program can change the screen layout at any time, and is possible to have several different menus (a bit like swapping the overlays on an overlay keyboard). These kind of terminals are used when the fast selection of information is important. ...read more.

The picture is thus made up of a string of 0's and 1's like 01101101110011010101100. This is in digital form. For a grey scale picture each dot may be one of several different shades of grey and this cannot be represented by just 0's and 1's is used to represent a shade. So for example 11111111= White 11111110= Light grey ............ 00000001= Dark grey 00000000= Black Using an 8-bit code like the one above gives us 256 different possible codes and so 256 possible shades of grey. For a colour picture a similar technique is used. Normally 3 different lights are shone on the picture and the reflected light from each is used to measure the colour value. Different colours are then represented using a collection of 0's and 1's as above. An 8-bit code will give us 256 colours. A 16 bit code will give us 65536 colours. Data capture Input methods that use a keyboard usually involve the transcription of the source data from the source document. This process clearly creates extra work, and if verification is employed to reduce errors made during transcription then the workload and the time taken is increased still further Documents readers are an automated method for putting data from the source document without the use of a keyboard. ...read more.

It is possible for documents typed on a normal typewriter or computer printer or even carefully hand printed documents to be read. The reliability of the reading depends on the clarity of the shape of the characters. The reader will expect a particular design of character (font) to be used. OCR is now quite common, and examples of OCR turnaround documents may be found on Gas and Electricity bills where the bill has figures printed on by the computer which can be read by OCR and enable the transfer of funds to take place. Advantages Disadvantages -Natural method for non-technical users -Cost of OCR readers -Data may be read by people -Not as reliable as OMR -Careful hand printing may be used Magnetic Ink Character Recognition (MICR) Here the characters are printed in special ink, which may be magnetised. Fonts used enable accurate reading of data. The typical example of this is it is used on bank cheques. Kimball tags Commonly used in fashion shops Bar Codes Commonly used in supermarkets Magnetic Strip Used for credit cards Voice Recognition Not yet good enough to become widely adopted Handwriting Recognition Progress being made on this but mainly used in specialist applications and with something other than normal handwriting e.g. PDAs. ...read more.