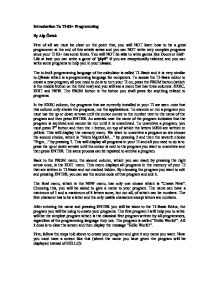 Introduction To TI-83+ Programming By Alp �ztek First of all we must be clear on the point that, you will NOT learn how to be a great programmer at the end of this article series and you can NOT write very complex programs since your TI 83+ has some limits. You will NOT be able to write games like Doom or Half-Life at best you can write a game of "pisti" if you are exceptionally talented and you can write some programs to help you in your classes. The in-built programming language of the calculator is called TI-Basic and it is very similar to QBasic which is a programming language for computers. To access the TI-Basic editor to create a new program, all you need to do is to turn your TI on, press the PRGM button (which is the middle button on the third row) and you will see a menu that has three columns: EXEC, EDIT and NEW. The PRGM button is the button you shall press for anything related to programs. In the EXEC column, the programs that are currently installed in your TI are seen -note that this column only shows the programs, not the applications. To execute or run a program you must use the up or down arrows until the cursor comes to the number next to the name of the program and then press ENTER. ...read more.

First, follow the steps told above to create your program and give it any name you want. Now you must have a screen like this (where the name you have given the program will be displayed instead of HELLO): PROGRAM:HELLO : To write commands in TI-Basic, you do not type them as you would do with computers. Instead you press the PRGM button where you will see another menu of three columns and the first two columns CTL and I/O has most of the commands you need. The first thing we want our program to do is to clear the screen, the command for which is ClrHome, the 8th command in the I/O column which you reach by pressing PRGM and then the right arrow. You will be taken to the Editor screen after you choose the command and press ENTER and now the screen will look like this: PROGRAM:HELLO :ClrHome Now press Enter once to go down to the next line. After each single command you have to go to the next line before writing another command. As another alternative, you may put a colon after a command and write a new command after the colon but in case of longer program codes this method usually complicates the matters for me. The other thing our program must do is to display the text "HELLO WORLD!". ...read more.

In one line you can write 16 letters and the screen has 8 lines. Creating Real Number Variables and Assigning Values to Them: TI-Basic uses several types of variables. A variable is a pre-defined place where you can store values to be recalled or changed later. Most important type of these variables is the Real variables which are used to store real numbers. There are 26 such variables in maximum. To assign a value to a variable you do the following (you do not need to define the variable type like you do in other programming languages, the variables in TI are already defined): Let's say that you want to store the number 12.54 into the real variable A.You first write the value to be assigned to the variable, 12.54 in this example, and then press the STO key (first key on the second row from the bottom) to put the arrow that gives the calculator the command to assign the value. After putting the arrow you write the variable into which the value will be stored, A in this example, and you must have a command that looks like this: 12.54 --> A Then you can press ENTER and the variable A will have the value 12.54 stored in it until you change the value or delete the variable. You can assign a value to a variable in the home screen and in a program. ...read more.