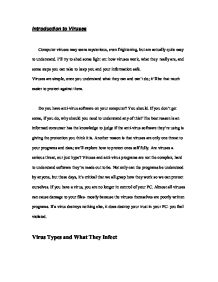 Introduction to Viruses Computer viruses may seem mysterious, even frightening, but are actually quite easy to understand. I'll try to shed some light on: how viruses work, what they really are, and some steps you can take to keep you and your information safe. Viruses are simple, once you understand what they can and can't do; it'll be that much easier to protect against them. Do you have anti-virus software on your computer? You should. If you don't get some, if you do, why should you need to understand any of this? The best reason is an informed consumer has the knowledge to judge if the anti-virus software they're using is giving the protection you think it is. Another reason is that viruses are only one threat to your programs and data; we'll explore how to protect ones self fully. Are viruses a serious threat, our just hype? Viruses and anti-virus programs are not the complex, hard to understand software they're made out to be. Not only can the programs be understood by anyone, but these days, it's critical that we all grasp how they work so we can protect ourselves. If you have a virus, you are no longer in control of your PC. Almost all viruses can cause damage to your files- mostly because the viruses themselves are poorly written programs. If a virus destroys nothing else, it does destroy your trust in your PC- you feel violated. Virus Types and What They Infect Viruses come in many types; written using many different infection strategies. ...read more.

02/15/2202 Virus-Worm "CoolNow": A new internet worm going by the name of "CoolNow" that infects computers upon visiting malicious Web sites, and spreads using the popular MSN Messenger Internet-pager. The new virus exploits a security hole in the Internet Explorer browser that Microsoft made public on Feb. 11 along with a bug fix, just two days before the worm appeared. Of great concern is the speed with which instant messages can be sent, and the amount of damage that could be caused by a well placed virus. The Wall Street Journal reported one of the patches Microsoft provided to users to fix security holes in Windows XP is vulnerable to the same type of virus it's designed to prevent. 01/31/2002 Linux.RST: This is a Linux virus that also implements several backdoor facilities, allowing an attacker to take control of the system infected with it. 01/28/2002 Myparty: The internet worm "Myparty" Poses as a web-site link. Not everything starting with "www" and ending in ".com" is a website! This virus spreads by E-mail. Appearing as a file attached to an E-mail message file and is a Windows application 30kb in length written in Microsoft Visual C++ and compressed in a XP utility. 01/17/2002 I-Worm.Gigger: This is a dangerous worm! It replicates using Outlook, Outlook Express, and mlRC. Is a worm written in Java Script and Visual Basic Script (VBS). It contains a destructive payload of routines that are able to format the user's hard disk after reboot, and can delete all files on all available disks. ...read more.

It cost megabucks to run those slow- moving hunks of metal; programmers had limited access to the dinosaurs. So the smarter ones created what they called "hacks" - programming shortcuts - to complete computing tasks more quickly. Sometimes their shortcuts were more elegant than the original program. Maybe the best hack of all time was created in 1969, when two employees at Bell Labs' think tank came up with an open set of rules to run machines on the computer frontier. Dennis Ritchie and Ken Thompson called their new standard operating system UNIX. It was a thing of beauty. Hackers View Latest Attacks with Scorn Longtime members of the computer hacker community- many of whom are now becoming well- regarded security consultants - are looking on the recent spate of attacks on the World Wide Web sites with distaste. The recent attacks are crude and amateurish say long time hackers. A denial- of- service attack is akin to killing an ant with a baseball bat- a crude and amateurish way of taking down a web site. Most hackers would rather infiltrate the site's security. Some deface Web pages with jokes, messages, or political statements but others seek to obtain sensitive data. Still others do nothing at all once they've broken into a system, treating the exercise as a test of skill. These attacks are worthless and childish; there is no grace, no skill and no intellect behind these attacks. There is definitely software out there that can filter out these attacks; unfortunately sites don't want to use it because it makes the pages load slower. It all boils down to profit versus protection. Which would you prefer? 2 ...read more.