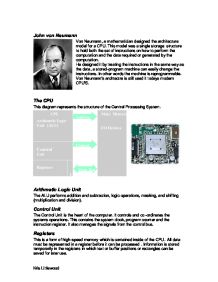 John von Neumann Von Neumann, a mathematician designed the architecture model for a CPU. This model was a single storage structure to hold both the set of instructions on how to perform the computation and the data required or generated by the computation. He designed it by treating the instructions in the same way as the data, a stored-program machine can easily change the instructions. In other words the machine is reprogrammable. Von Neumann's archtectre is still used it todays modern CPU'S. The CPU This diagram represents the structure of the Central Processing System. ...read more.

It also manages the signals from the control bus. Registers This is a form of high-speed memory which is contained inside of the CPU. All data must be represented in a register before it can be processed. Information is stored temporarily in the registers in which text or buffer positions or rectangles can be saved for later use. Buses A bus is a channel or path between the components in a computer. Having a high-speed bus is important. ...read more.

The first connects the CPU and the system memory. This is the fastest bus in the system. The second bus is the slower and it connects other devices, like the hard disk, CD drive, graphics card etc. These slower buses connect to the system bus through a bridge which integrating the data from the other buses to the system bus. RAM Random Access Memory is the place in a computer where the operating system, application programs, and data in current use are kept temporarily so that they can be quickly reached by the computer's processor. The RAM is plugged on to the mother board and the processor accesses the RAM via buses. Kris Littlewood ...read more.