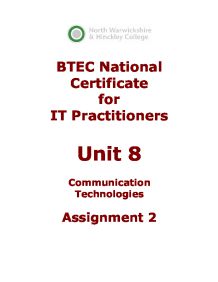 BTEC National Certificate for IT Practitioners Unit 8 Communication Technologies Assignment 2 Introduction In this assignment I am going talk about what network protocols are and what do they do. I will list the different types of protocols LAN's & WAN's use to communicate. Communication Protocols A protocol is a computer communication language which allows computers to talk to each other on a network. Networks depend on protocols. Without the protocols the hardware is useless. OSI Model 7 Layers & Protocols Layer 1 (Physical) - This layer contains the protocols which allow transmission of binary either on a cable or over hardware. There are lots of different types of protocols that work at this layer. ADSL - Allows faster rates of transmission over copper cables, this system commonly known as broadband. ADSL stand for Asymmetric Digital Subscriber Line. ISDN - Integrated Services Digital Network allows the integration speech and data on the same telephone line RS-232 - Recommended Standard 232 allows the modem and pc connection. It is a quite old system, normally used with a serial port. Layer 2 (Data Link) - Allows the transmission of data on the same network but to different computers. This has the ability of correcting error is any were made by the L1. Ethernet - Commonly used cable when creating LAN networks. ...read more.

PPP PPP which is Point to Point Protocol which enable and establishes a direct connection between two device over a serial cable, including phone lines and fibre optic links. There are two sub categories of PPP. PPP over Ethernet and PPP over ATM, both used for similar things using DSL internet service. PPP works at the data link layer protocol; it is another important protocol because it acts as a connection for synchronous and asynchronous circuit which have stopped using non-older standard Serial Line Internet protocol. Ethernet Widely used for LAN technology. It uses coaxial cable and is also used in wireless LAN's. The newer used Ethernet systems are called the 10 BASE T. They reach up to transmission speeds of 10Mbps. It works in the data link layer. It is quite important because everywhere you go you would mostly see the Ethernet system's deployed. Internet Protocol (IP) Internet Protocol (IP) is the protocol which allows communication across packet switched internetwork using TCP/IP. IP is and really important protocol because it delivers the packets from the source host to the destination node based on its address. It also defines the addressing methods and structuring for datagram encapsulation. IPv4 is the main dominant protocol for the internet although the IPv6 is more widely known and deployed. This works at the network layer. ...read more.

DNS DNS which stands for Domain Name System is a naming system for computers, services, or any other resource in the Internet. It will translate the human text to binary indentifies associated; this allows network equipment to locate and addresses these devices world-wide. Often the concept of a phonebook is applied to make someone understand the theory of DNS, It acts as a phonebook for the Internet by translating the human text to IP addresses. For example www.google.co.uk is translated to 74.125.76.104. SMTP SMTP protocol which stands for Simple Mail Transfer Protocol. SMTP is an internet standard for electronic mail transfer across IP addresses. This is also a text based protocol. In text based one or more recipients can be added and other encoded subjects can also be attached and transfer. When the mail is transferred it will first go to a remote server using different commands of quires and responses between the server itself and the client. MIME Multi Purpose Internet Mail Extensions (MIME) is a Internet Standard which extends the format of an e-mail to support character sets other than the US-ASCII, non-text attachments, message bodies with multiple parts header information in non ASCII character sets. It works at the presentation layer and it is important for e-mail because it defines mechanisms which allow other kinds of information to be sent via the e-mail. This include text language other than English using character encoding other than ASCII and 8 bit binary content and files containing sound, video, images and computer programs. ...read more.