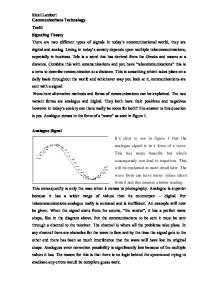 Communications Technology Task1 Signaling Theory There are two different types of signals in today's communicational world, they are digital and analog. Living in today's society depends upon multiple telecommunications, especially in business. Tele is a word that has derived from the Greeks and means at a distance. Combine this with communications and you have "telecommunications" this is a term to describe communication at a distance. This is something which takes place on a daily basis throughout the world and whichever way you look at it, communications are sent with a signal. From here alternative methods and forms of communications can be explained. The two variant forms are analogue and digital. They both have their positives and negatives however in today's society can there really be room for both? The answer to this question is yes. Analogue comes in the form of a "wave" as seen in figure 1. Analogue Signal This consequently is only the case when it comes to photography. Analogue is superior because it has a wider range of values than its counterpart - digital. For telecommunications analogue really is outdated and is inefficient. An example will now be given. When the signal starts from the source, "the sender", it has a perfect wave shape, like in the diagram above. ...read more.

This is likely to happen with any new brand of technology and it just costs money. When digital signals are sent through the channels they still receive resistance. It's however on a lesser scale due to the encryption and so on. Using basic numbers such as 0 and 1 in a methodological approach can assist in fixing these errors. There will always be some sort of deviation from the original signal, however today things need to work to their optimum performance levels. Analogue in its day was just that but is now far too outdated. With such extreme advances in technology, digital is the way forward. Role of the Modem The modem is vital for making communications happen in computing. It's the central figure of the way communications from computer to computer occur. As described, computers are forms of digital applications. They are in turn only capable of producing a digital output. As the globe has only been using analogue signals to communicate for the last 10 - 20 years, this rather limits opportunity in sending digital data from one computer to another. Phone lines are all forms of analogue signaling and this is perfect for telephone calls, however this generation need more. ...read more.

For frequency modulation 0 = For Frequency Modulation 1 = For Phase Modulation 0 = For Phase Modulation 1 = Once the signals have been modulated into their variant forms they are then able to be sent through a channel. What form the digital signal is modulated into depends on the nature of what it shall be used for. For Radio the likely hood will be that it will be in either a Frequency or Amplitude modulated signal. This is due to the channel it is being sent through. The channel it's being sent through constrains the signal to be sent. Amplitude is suitable for radio as it can increase the amps of wave strength to suit whilst the frequency remains a constant. Frequency modulation is commonly preferred today due to its vast array of differences although it does use a much higher bandwidth than its counterpart. It's an adaptable radio wave and comes in many forms. It has a narrow band feature which can be used in day to day radio for speech and music. Narrow band ensures that a low bandwidth is to be used. Further, frequency modulated waves are used to record on basic VHS recording systems. VHS has a large range of frequency components which range from a few mega hertz to several. ?? ?? ?? ?? Ricki Lambert ...read more.