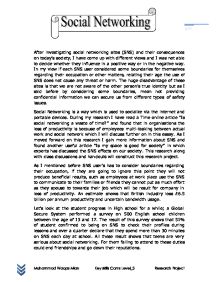 After investigating social networking sites (SNS) and their consequences on today's society, I have come up with different views and I was not able to decide whether they influence in a positive way or in the negative way. In my view if each SNS user considered some boundaries for themselves regarding their occupation or other matters, relating their age the use of SNS does not cause any threat or harm. The huge disadvantage of these sites is that we are not aware of the other person's true identity but as I said before by considering some boundaries, mean not providing confidential information we can secure us from different types of safety issues. Social Networking is a way which is used to socialize via the internet and portable devices. During my research I have read a Time online article "Is social networking a waste of time?" and found that in organisations the loss of productivity is because of employees multi-tasking between actual work and social network which I will discuss further on in this essay. As I moved forward on this research I gain more information about SNS and found another useful article "Is my space is good for society" in which experts has discussed the SNS effects on our society. ...read more.

An assistant professor of Telecommunication Information Studies and Media at Michigan State University believe that SNS have made us better off as a society and individuals. By the passage of time we will see increase in SNS utility as more population will adopt it. Political activities organized via Facebook, Job found through LinkedIn and growing amount of academic research on SNS are the evidence of positive outcomes of this technology. During the last three years a research has been carried out by a team at the Michigan State university to find out why individuals would voluntarily use a site that based on media reports, offer only a way to disclose information they should not reveal, collect hundreds of friends they did not know and waste time which can be spent on studies. In this research they done a survey to understand the benefit individuals receive from their relationships with other on SNS. They found that individuals are able to receive information and ideas from the people they don't know very well. They are using Facebook to increase the size of their social network and therefore their access to more information and various perspectives. ...read more.

In their opinions tools provided by SNS have improved the quality of people's lives and made it nearly effortless for us to keep in touch with friends, family, colleagues and also have increased the chances to make new friends and create a community. The negatives are that all the sharing of information can lead to some harmful situations like recruiters can assess young professional's profiles which are applying for jobs by hacking into their SNS accounts and make decision on based of the accessed information. As well as becoming computer addicted and committing suicide can also become a matter due to the SNS. Now having researched into social networking my views are still the same as I originally thought but now I have more knowledge, a better understanding of social networking and why people do it. Also I realize that negative impact of SNS can be reduced by encouraging and directing the users in positive way e.g. education, advertising etc...Also I was immensely delighted to discover individual's views regarding the future which they believe we can interact with others on the Web, by having truly immersive face to face video conversations and experience a fusion of our real and cyber worlds where second life becomes second nature. ?? ?? ?? ?? Muhammad Waqas Mian Key skills Coms Level_3 Research Project ...read more.