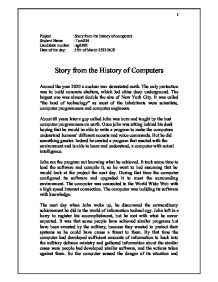 Story from the History of Computers

Project : Story from the history of computers Student Name : Tom234 Candidate number : sgi1001 Date of the day: :15th of March 2522 BCE Story from the History of Computers Around the year 2020 a nuclear war devastated earth. The only protection was to build concrete shelters, which led cities deep underground. The largest one was almost double the size of New York City. It was called "the land of technology" as most of the inhabitants were scientists, computer programmers and computer engineers. About 60 years later a guy called John was born and taught by the best computer programmers on earth. Once john was sitting behind his desk hoping that he would be able to write a program to make the computers understand humans' different accents and voice commands. ...read more.

The next day when John woke up, he discovered the extraordinary achievement he did in the world of information technology. John left in a hurry to register his accomplishment, but he met with what he never expected. It was that some people have achieved similar programs but have been arrested by the military, because they wanted to protect their systems as he could have cause a threat to them. By that time the computer had developed sufficient amounts of information to hack into the military defence ministry and gathered information about the similar cases were people had developed similar software, and the actions taken against them. ...read more.

John was amused by his development and decided to keep it safe and secret. As the program got bigger and bigger with knowledge, his computer hardware couldn't handle the size of the program and the power it required; so the program loaded itself on the main frame again and used some of the servers' power. Two days later the computer got a solution for the city's biggest problem: "space" as the city is too small and it is almost impossible to expand. The solution was to create a computer generated dream world with the same characteristics and rules as in earth, where people will be connected to the system through a cable in their bellybuttons, john got impressed by the idea and invested his time to support it and influence other people, that led to the technology we live in today (The Xeon). 1 ...read more.