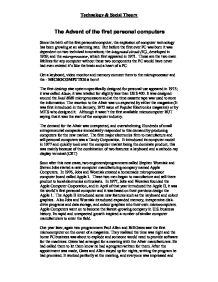 The Advent of the first personal computers

The Advent of the first personal computers Since the birth of the first personal computer, the explosion of computer technology has been growing at an alarming rate. But before the first ever PC was born it was dependent on two technical innovations; the integrated circuit (IC), developed in 1959; and the microprocessor, which first appeared in 1971. These are the two main lifelines for any computer without these two components the PC would have never had even existed it's like the brain and a heart of a PC. Get a keyboard, video monitor and memory connect them to the microprocessor and the - MICROCOMPUTER is born! The first desktop size system specifically designed for personal use appeared in 1975; it was called Altair, it was retailed for slightly less than US $ 400. It was designed around the Intel 8080 microprocessors and at the time cassette tape was used to store the information. ...read more.

In 1976, Jobs and Wozniak created a homemade microprocessor computer board called Apple 1. These two men began to manufacture and sell there product to local electronics enthusiasts. In 1977, Jobs and Wozniak founded the Apple Computer Corporation, and in April of that year introduced the Apple II, it was the world's first personal computer and it was based on their previous design the Apple 1. The Apple II introduced some new features such as the keyboard and colour graphics. Also Jobs and Wozniak introduced expanded memory, inexpensive disk-drive programs and data storage, and colour graphics into their own microcomputers. Apple Computers went on to become the fastest-growing company in U.S. business history. Its rapid and unexpected growth inspired a number of similar computer manufacturers to enter the field. One year later, again two programmers Paul Allen and Bill Gates saw the first microcomputer on the cover of a magazine. ...read more.

When PC first appeared, they were only capable of handling only 4, 8 or 16 bits of information at one time. But today we have we have advanced from desktops to laptops to palmtops. With increasing demands for speed and space, people have turned to palmtops to meet their business and personal needs. Businesses, big and small, have begun to equip their employees with personal palmtops instead of laptops; students have discarded their personal organizers for palmtops. Being compact and lightweight enough to fit a pocket, it has slowly begun to take its place in the running of everyday lives. It is as if we suddenly have been able to make freeze-dried cappuccino which is so good that by adding water, it comes back to us as rich and aromatic as any freshly-brewed in an Italian caf�. While e-mail was relatively unheard of in 1990, millions of people now surf the Internet using palmtops! Technology & Social Theory ...read more.