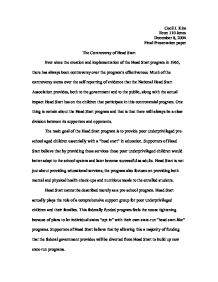 The Controversy of Head Start

Proponents of Head Start view this as a threat to the health of Head Start programs around the nation. These individuals believe that by diverting funds from a proven program to unproven programs will leave, many if not all, eligible children in the lurch. The Head Start controversy is similar in many ways to the Social Security dilemma. Do we take what we have right now and provide it to everyone without worrying about the future or do we invest in a proven program for the betterment of the future? This is only one of many questions that lawmakers must carefully weigh before committing to a course of action that could shut the Head Start program down for good. ...read more.

This can be caused by state legislators cutting or diverting funding to other programs or even the total closure of a program in order to balance state budgets. No matter what the outcome is over the controversy of Head Start, there will be one clear loser and that is the children that would have benefited from the wide range of services provided by Head Start. Conversely, state budgetary concerns should also be taken into consideration because of the potential impact tax increases and budget cutbacks would have on residents of individual states. All in all it would not be wise to quickly bring about the demise of a proven early childhood program by transforming it from "head start" to "dead end." ...read more.