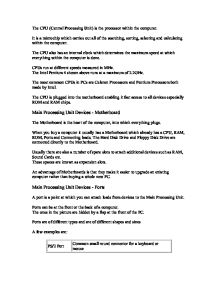 The CPU (Central Processing Unit) is the processor within the computer

The CPU (Central Processing Unit) is the processor within the computer. It is a microchip which carries out all of the searching, sorting, selecting and calculating within the computer. The CPU also has an internal clock which determines the maximum speed at which everything within the computer is done. CPUs run at different speeds measured in MHz. The Intel Pentium 4 shown above runs at a maximum of 2.2GHz. The most common CPUs in PCs are Celeron Processors and Pentium Processors both made by Intel. The CPU is plugged into the motherboard enabling it fast access to all devices especially ROM and RAM chips. Main Processing Unit Devices - Motherboard The Motherboard is the heart of the computer, into which everything plugs. When you buy a computer it usually has a Motherboard which already has a CPU, RAM, ROM, Ports and Connecting leads. The Hard Disk Drive and Floppy Disk Drive are connected directly to the Motherboard. Usually there are also a number of spare slots to attach additional devices such as RAM, Sound Cards etc. These spaces are known as expansion slots. An advantage of Motherboards is that they make it easier to upgrade an existing computer rather than buying a whole new PC. ...read more.

It has a port which allows for a suitable connector and cable to then connect the PC to a network device. Storage Devices - Floppy Disk These are cheap ways of storing things but can only hold 1.44 Mb of data. Inside the plastic casing is a small disk which has a surface which can store magnetic patterns. When inserted into the computer, the metal sleeve slides across to reveal a part of the disk to a read/write head. The disk spins round within its casing and the head can move back and forth. Casings come in different colours but the most common are black and blue. Most computers have a floppy disk drive and this means the floppy disk is a cheap way of moving or copying small amounts of data from one computer to another. They can also carry computer viruses between computers so BEWARE! Storage Devices - Hard Disk Hard Disks have the capacity to store lots of data. The one in the picture above can store 10Gb. Hard Disks have a smooth surface which, like floppy disks, can be magnetised so they can be used to store data over and over again. Hard Disks are usually fixed inside the computer and are connected to the Motherboard with a ribbon cable. ...read more.

Once produced or 'pressed' a standard CD ROM cannot be overwritten. CD ROM shares the same technology as Audio CDs so an Audio CD can be played in a computer CD ROM Drive. Data CD ROMs should not however, be used on Audio equipment. A DVD ROM is able to store a massive amount of data, typically about 4.3Gb. This is roughly the same as about 6 or 7 CD ROMs! DVD ROM technology was originally designed to hold high quality video. DVD ROMs store data optically. Once placed in a DVD ROM Drive the DVD rotates and a laser light moves back and forth to read the information. Information can be stored on both sides of the disk unlike CD ROM which can only store information on one side. DVD drives operate at different speeds which means the speed at which data can be retrieved varies. The quality of the laser also affects the performance. DVD ROMs often hold information like movies in an encrypted format. This is to try and stop pirate copies of copyright material being made. Many DVD ROM Drives are fitted inside the casing of the Main Processing Unit with a cable connecting the drive to the Motherboard. Once 'pressed' with new data DVD ROMs cannot be erased and refilled with different data. It is generally accepted that DVD ROM technology will replace CD ROM technology in the next few years. ...read more.