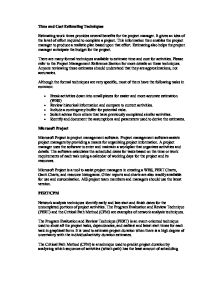 Time and Cost Estimating Techniques Estimating work times provides several benefits for the project manager. It gives an idea of the level of effort required to complete a project. This information then enables the project manager to produce a realistic plan based upon that effort. Estimating also helps the project manager anticipate the budget for the project. There are many formal techniques available to estimate time and cost for activities. Please refer to the Project Management Reference Section for more details on these techniques. Anyone reviewing these estimates should understand that they are approximations, not accuracies. Although the formal techniques are very specific, most of them have the following tasks in common: * Break activities down into small pieces for easier and more accurate estimation. (WBS) * Review historical information and compare to current activities. * Include a contingency buffer for potential risks. * Solicit advice from others that have previously completed similar activities. * Identify and document the assumptions and parameters used to derive the estimates. Microsoft Project Microsoft Project is project management software. Project management software assists project managers by providing a means for organizing project information. ...read more.

A wide range of observational techniques are commonly used and combined according to the particular requirements of a study. Observations may be direct observations, where the investigator is actually present during the task (visual observations, remote observations via closed-circuit television), or indirect observations, where the task is viewed by some other means such as video recording or time-lapse photography. Application Perhaps the most obvious method by which the user can be analysed is to observe him or her performing the task in an operational situation. Although observational techniques can capture the details of many individual tasks, they may not elicit the work role. Thus, observational techniques are most appropriate when the information of primary interest is of visual or auditory form. Thus, observation methods can be especially useful for recording physical task sequence, or verbal interactions between several people. One method which can augment the information gathered is that of current verbal accounts. Here the user is asked to 'think aloud' and describe the activities he or she is performing as they are undertaken. Advantages Observational techniques produce information which cannot be collected in any other way. Indeed, detailed physical task performance, social interactions, surrounding influences can be recorded. ...read more.

Participant observation The investigator takes part in the tasks alongside other operators. It may be a useful data collection approach if skilled performance is such that actions are "semi-automatic" in which case users may find it difficult to verbalise how they are achieving the task goals. This type of observation can also be useful if aspects of team performance are being investigated to understand how the team members are organised and perform their tasks. Communication and conversational analysis Investigation of the patterns in the organisation of people's interaction (it would be possible to use the principle of analysing a conversation between two travellers, or one traveller and one transport enquiry office operator in real situations, in order to identify the needs for the traveller in specific contexts, what are the difficulties encountered, how a system could resolve these difficulties,... ). One of these methods is the language / action approach which considers the language as a means by which people act. Advantage of this method : it provides a complete and logical conceptual frame in order to investigate all kinds of conversation. Disadvantage of this method : many situations are characterised by subtle communication processes not taken into account by the model. There is also a difficulty in labelling an interaction and a message especially if they do not fit into the request or promise categories. ...read more.