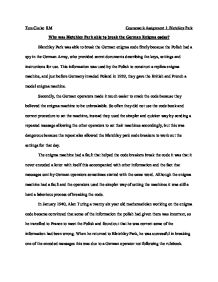 Tom Clarke RM Coursework Assignment 1: Bletchley Park Why was Bletchley Park able to break the German Enigma codes? Bletchley Park was able to break the German enigma code firstly because the Polish had a spy in the German Army, who provided secret documents describing the keys, settings and instructions for use. This information was used by the Polish to construct a replica enigma machine, and just before Germany invaded Poland in 1939, they gave the British and French a model enigma machine. Secondly, the German operators made it much easier to crack the code because they believed the enigma machine to be unbreakable. So often they did not use the code book and correct procedure to set the machine, instead they used the simpler and quicker way by sending a repeated message allowing the other operators ...read more.

When he returned to Bletchley Park, he was successful in breaking one of the encoded messages this was due to a German operator not following the rulebook. John Herivel a mathematician tried to put himself in the position of a German operator and thought the operators would not be careful when setting the code in the morning, he thought what if the operators did not bother to reset their machines and the message they sent would not be random. Disappointingly, his idea did not work because their was not enough messages to make use of, but after the German invasion of Denmark and Norway the number of messages increased this made them more likely to find a messages the same. ...read more.

In December 1941, Bletchley Park found out that the German navy did not know that the three-wheeled enigma machine had been cracked and were just trying to make the system more secure by using the four-wheeled machine. The u-boats had the new four-wheeled machine but the shore bases and supply depots did not so they could still break the code. After the battle of the Atlantic had been won Bletchley Park took on the challenge of breaking the code called fish, the code Hitler used to send messages when the code breakers attempted to crack they face the problem of not knowing what the machine looked like, but after two months of hard work they worked this out and made replica of one. This allowed the Bletchley Park to read the messages sent from Berlin to the commander of the German forces. ...read more.