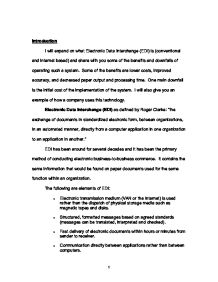 What Electronic Data Interchange (EDI) is (conventional and internet based) and share with you some of the benefits and downfalls of operating such a system. Some

Introduction I will expand on what Electronic Data Interchange (EDI) is (conventional and internet based) and share with you some of the benefits and downfalls of operating such a system. Some of the benefits are lower costs, improved accuracy, and decreased paper output and processing time. One main downfall is the initial cost of the implementation of the system. I will also give you an example of how a company uses this technology. Electronic Data Interchange (EDI) as defined by Roger Clarke: "the exchange of documents in standardized electronic form, between organizations, in an automated manner, directly from a computer application in one organization to an application in another." EDI has been around for several decades and it has been the primary method of conducting electronic business-to-business commerce. It contains the same information that would be found on paper documents used for the same function within an organization. The following are elements of EDI: * Electronic transmission medium (VAN or the Internet) is used rather than the dispatch of physical storage media such as magnetic tapes and disks. ...read more.

Compatibility with new applications is difficult because of the complexity of the X12 formats. As a result of the compatibility the process of transferring large batches of data are delayed, which is at odds with today's real-time world. Also, the cost of transmitting data through VANs is very costly at $25 per 1,000 characters, but today costs are getting lower. Because conventional EDI is so rigid, costly and time consuming to initiate, it is only cost-effective for very large companies. For these reasons it keeps the number of EDI participants relatively very low. EDI via the Internet The internet was once thought to be the end of EDI, but instead it has given EDI users new options. EDI via the internet is basically the same as conventional EDI with the exception of how the information is transmitted. EDI transactions can now be sent over the internet instead of sending X12 forms back and forth via VANs. Software products put transactions into encrypted envelopes and then electronically seal them so that only authorized parties with the encryption key can view the contents. ...read more.

The full potential of an EDI system can be best utilized if it is integrated with other applications such as inventory control, shipping, accounts payable and production planning. Unfortunately, suppliers are forced to use the sometimes costly EDI system in order to continue a business relationship with the larger companies. This is not always as cost-effective for suppliers as it is for the larger companies. Summary EDI saves time because it is faster at transmitting data, delivers data with the utmost accuracy, cuts down on paper usage and decreases overall time by eliminating re-keying of information. It is a more stream-lined business process for both trading parties. Benefits can be obtained in areas like administration, inventory management, distribution, and cash management. EDI has its share of problems, but its benefits far exceed them. With the internet it is becoming easier for trading partners to transmit data at a much greater reduced cost to both parties. The next few years hold great promise for EDI and the internet. Existing EDI forms can be kept by trading partners and new ways of transmitting data can be found cheaper, which will enable more new partners. ...read more.