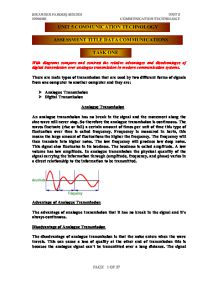 The analogue signal is converted into a 16 bit binary number, which gives 65,536 levels of voltage. In electronics 1 = ON and 0 = OFF. This means the binary number can be converted into an electrical signal. A diagram below shows the process of converting analogue signals into a binary numbers and digital signals. To keep the explanation simple the analogue signal has been converted into a 3 bit binary number, which means there are seven voltage levels. A digital-analogue converter reverses the conversion this is because the speakers (output device) need an analogue signal. Light and sound can be converted into binary numbers and digital signals that are used to record and transmit information. This diagram is shown below: Why are digital systems better than the analogue ones? An analogue signal is affected by changes in the voltage as it travels along a wire. If the voltage changes, so does the signal at the output. The digital signal is not affected by changes in the voltage this is because all that matters is whether it is ON or OFF. How signal affects transmission methods? Noise is any sound on the CD or record that wasn't there at the performance during the recording session. More generally, it is any unwanted signal that adds on to the information that is being transmitted. When a vinyl record is being made, noise is introduced at every step of the recording process, although of course the company makes an every effort to reduce such noise to as low a level as possible. The sound that reaches the microphones is converted into an electrical signal that is then recorded on a wide magnetic tape moving at high speed. This tape is then used to control the cutting of a master disc, from which moulds are then made. These in turn are used to mass-produce the records that are eventually sold in shops. ...read more.

Wave Division Multiplexing WDM This is short for wavelength division multiplexing, a type of multiplexing and developed for use on optical fiber. WDM modulates each of several data streams onto a different part of the light spectrum. WDM is the optical that is equivalent of FDM. WDM is a way to transfer data in optical fibres. WDM uses white light to transfer data on different wavelength. Lasers handle this. These signals are totally independent of each other. The amount of traffic - data, voice, and multimedia - travelling over the Internet and by other networks grows at rates that are hard to quantify, but everyone agrees the increase is beyond anyone's wildest dreams. Once all this traffic leaves a local network (or home or a small business), it goes into the hands of a carrier or service provider, and typically is sent over a fibre optic cabling infrastructure. Even service providers too small to have their own fibre infrastructure use fibre built and run by someone else. Fibre optic cabling moves lots of traffic quickly, but even these fat pipes feel the bandwidth pinch. So rather than pay exorbitant amounts to lay new fibre cabling, providers rely on technologies that increase the amount of data a single piece of fibre can handle. Paper Base Source > BTEC Nationals for IT Practioners, Knott Geoffrey BA, AIB et al Nick Waites, (2002), Great Britain, Edexcel, Brancepeth Computer Publications Ltd, ISBN: 0953884813. > A Glossary of Computing Term, Addison-Wesley, Tenth Edition, The British Computer Society, Pearson Education, ISBN: 0201-77629-4 > GNVQ Information Communication Technology, Wischhusen M, et al Snell, J, Scales A, (2000), Oxford, Heinemann Educational Publishers, ISBN: 0-435-45598-2 > Computers Simplified 3rd Edition Author: Ruth Maran Published by Maran Graphic;IDG Books World-Wide Inc, ISBN: 0-435-45598-2. > Global Information Systems, 1st Edition 1997,Published by Macmillan Press Ltd, Houndsmills, Hampshire, ISBN: 0333-68951-8. ICT Base Source > www.google.com > www.howstuffworks.com > www.whatis.com > www.webopedia.com > www.memoryforall.com > www.aol.com > www.askjeeves.com SIKANDER FAROOQ SHEIKH UNIT 5 10096056 COMMUNICATION TECHNOLOGY PAGE 1 OF 37 ...read more.