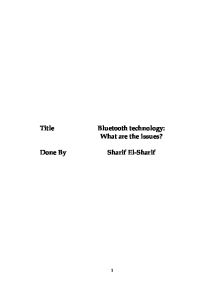 Bluetooth technology: What are the issues?

Title Bluetooth technology: What are the issues? Done By Sharif El-Sharif A. Presentation of the Issue When you use computers, entertainment systems or telephones, the various pieces and parts of the systems make up a community of electronic devices. These devices communicate with each other using a variety of wires, cables, radio signals and infrared light beams, and an even greater variety of connectors, plugs and protocols. Bluetooth technology offers a completely different way to form the connections. Bluetooth is wireless and automatic, and has a number of interesting features that can simplify our daily lives. Bluetooth wireless technology revolutionizes the personal connectivity market by providing freedom from wired connections - enabling links between mobile computers, mobile phones, portable handheld devices, and connectivity to the Internet. B. The IT Background of the Issue Bluetooth conceived initially by Ericsson, before being adopted by a myriad of other companies, Bluetooth is a standard for a small, cheap radio chip to be plugged into computers, printers, mobile phones, etc. A Bluetooth chip is designed to replace cables by taking the information normally carried by the cable, and transmitting it at a special frequency to a receiver Bluetooth chip, which will then give the information received to the computer, phone, whatever. ...read more.

Won't drain your battery. * 2.5 GHz radio frequency ensures worldwide operation. * No thinking required. The devices find one another and connect without any user input at all. Disadvantages * New type of technology and must be accepted unequivocally by all vendors and manufacturers in order to guarantee compatibility among the array of products. * Designed for only short-range communications certified to no more than 100 meters (with hub broadcaster.) * Data transfer speeds are not as fast as other wireless technologies. D. Solution to the Problems Arising from the Issue While Bluetooth was introduced as early as 2000, key obstacles have delayed its adoptability among vendors and consumers. While Bluetooth is growing popularity in Western Europe, as an estimated 21.6 million Bluetooth-enabled mobile phones were sold in 2003 (Milanesi 2003, 1), it continues to have problems in with its interoperability, security and usability. Bluetooth's core dilemma is that it remains an open source technology available to anyone yet does not have an interoperability body to set a standardization among the industry to ensure that Bluetooth devices from different vendors work properly with each other. ...read more.