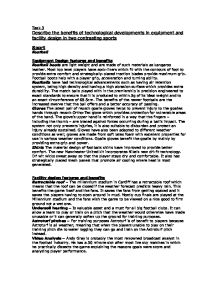 Task 3 Describe the benefits of technological developments in equipment and facility design in two contrasting sports Sport Football Equipment Design features and benefits Football boots are light weight and are made of such materials as kangaroo leather. Most top level players have sock-liners which fit with the contours of foot to provide extra comfort and strategically-placed traction blades provide maximum grip. Football boots help with a player grip, acceleration and turning ability. Footballs have had technological advancements such as having air retention system, being high density and having a high abrasion surface which provides extra durability. The match b***s played with in the premiership is precision engineered to exact standards to ensure that it is produced to within 3g of its ideal weight and to an exact circumference of 68.5cm. The benefits of the newer footballs are the increased swerve that the ball offers and a better accuracy of passing. Gloves The latest pair of reusch goalie gloves helps to prevent injury to the goalies hands through reusch Ortho-Tec glove which provides protection for vulnerable areas of the hand. The glove's upper hand is reinforced in a way that the fingers - including the thumb - are braced against forces occurring during a ball's impact. The system not only prevents injuries, it is also suitable to disburden and protect an injury already sustained. Gloves have also been adapted to different weather conditions as well; gloves are made from soft latex foam with excellent properties for use in various weather conditions. Goalie gloves benefit the goalie by mainly by providing extra grip and power. Shirts The material design of footballs shirts have improved to provide better comfort. The new Manchester United kit incorporates Nike's new dri-fit technology. Dri wit wicks sweat away so that the player stays dry and comfortable. It also has strategically placed mesh panels that promote air cooling where heat is most generated. ...read more.

* Finally retractable roof technology came to football in the form of the millennium stadium which allows us to watch the cup finals without the threat of rain. The same technology is being developed at Wimbledon hopefully coming into affect for the 2009 championship. They are looking to put a retractable roof over the centre and 2nd court to finally stop the rain from ruining our championships. * The biggest similarity between the two sports is the improvement in shirt technology. The shirts that a worn between the elite players of football and tennis are very similar with the elite athletes both using Nike's dry fit technology and adidas's climacool technology. Both sets of players reap the benefits of more comfortableness and improved abilities to wick sweat away. Differences * One of the main differences is that of technology that is already in place and of the technology that is not yet in place. For instance the retractable roof is already in place in football but not as yet in tennis, Line decisions are in place in tennis but not as yet in place in football. * The differences between undersoil heating and the dry court technology. For instance if there was a major frost on a dry court the irrigation system wouldn't be able to deal with it as effectively as the undersoil heating which is made more to combat frost and snow. * There are many similarities between the trainers/boots used in the sports but the main difference between the two is the materials that construct the boot itself. Tennis and football are two very different games so you would expect the footwear to be different in many ways as well. Separating the trainers/boots comes down to durability. A football boot is a lot harder than a tennis shoe it is made up of tougher leather which makes it more durable. Football unlike tennis is a contact sport and with players stamping on your foot in football the evolution of the boot ...read more.

The other benefit I can think of to the UK is that better equipment design has led to better performance. This is from grass roots level all the way to the top. Children playing at their local tennis courts are benefiting from lightweight and durable racquets the same way that players at the top such as Andrew Murray are. A big technological advancement to help sportsmen in the UK is that of the hypoxic tent. Sportsmen living in countries such as South Africa, Peru and Mexico have had a natural advantage over our athletes. In the past our athletes would have had to have flown over to one of these countries in order to train at high altitude but now there are hypoxic tents which athletes can use in the comfort of their own home. This is of enormous benefit to the UK because it has helped bridge the gap and put our athletes on par with those athletes from high altitude countries. Hypoxic tents have also been known to help with injuries the most high profile case being David Beckham who claimed that his foot injury would never have healed in time for the world cup had he not used the hypoxic tent. Injury prevention has also been of benefit to the UK, new designs in injury prevention equipment have enabled players to come back from injuries that they never would have come back from in the past. I remember when a footballer used to have a cruciate ligament injury it used to mean that his career was virtually over, nowadays 90% of all players come from cruciate ligament injuries. This has helped players in the UK from your local pub teams to your Premiership clubs. Lastly, improvements in technology benefiting the UK can also be applied to personal sports gear such as clothing and shoes. A recent, albeit controversial example, is the full body suits used by our British swimmers which streamline the competitor reducing times in a sport where winning or losing is measured in hundredths of a second. ...read more.