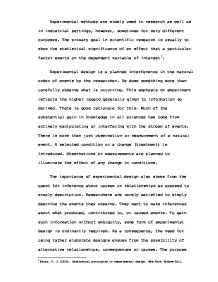 Experimental methods are finding increasing use in manufacturing to optimize the production process. Specifically, the goal of these methods is to identify the optimum settings for the different factors

Experimental methods are widely used in research as well as in industrial settings, however, sometimes for very different purposes. The primary goal in scientific research is usually to show the statistical significance of an effect that a particular factor exerts on the dependent variable of interest1. Experimental design is a planned interference in the natural order of events by the researcher. He does something more than carefully observe what is occurring. This emphasis on experiment reflects the higher regard generally given to information so derived. There is good rationale for this. Much of the substantial gain in knowledge in all sciences has come from actively manipulating or interfering with the stream of events. There is more than just observation or measurement of a natural event. A selected condition or a change (treatment) is introduced. Observations or measurements are planned to illuminate the effect of any change in conditions. The importance of experimental design also stems from the quest for inference about causes or relationships as opposed to simply description. Researchers are rarely satisfied to simply describe the events they observe. They want to make inferences about what produced, contributed to, or caused events. ...read more.

were used. A constant variable was introduced through clearly specified outcome probabilities4. Independent variables, which are variants of decisions the respondents had to make, were established by the researchers5; however, dependent variables were not properly defined even though they may have made a significant impact on the results of the experiment. I may be mistaken, but based on this I'd say there is no strong evidence of design control. No matter that the design was based on random assignment and statistical controls, there are many factors that hadn't been properly taken into consideration, such as people's age, sex, past experience, education, occupation, social factor, etc. and their impact was not properly evaluated when interpreting the results. Besides that, in my opinion, when analyzing and interpreting the collected data, the authors had to assess similarity of some particular (sub)groups (which, by the way, had not been singled out neither) and detect possible tampering with randomization process. Hence, if the groups were defined, it would be possible to conduct further factoral design in order to study different interventions on the same population and/or potential interactions between several populations6. ...read more.

In the end, if the situation is right, an experiment can be a very strong design to use. But it isn't automatically so. My own guess is that randomized experiments are probably appropriate in no more than 10% of the social research studies. Summary Experimental methods are finding increasing use in manufacturing to optimize the production process. Specifically, the goal of these methods is to identify the optimum settings for the different factors that affect some particular process. In the discussion so far, the major classes of designs that are typically used in experimentation can been introduced: two-level, multi-factor designs, screening designs for large numbers of factors, three-level, multi-factor designs (mixed designs with 2 and 3 level factors are also supported), central composite (or response surface) designs, Latin square designs, Taguchi robust design analysis, mixture designs, and special procedures for constructing experiments in constrained experimental regions9. Interestingly, many of such experimental techniques have "made their way" from the production plant into management, and successful implementations have been reported in profit planning in business, cash-flow optimization in banking, etc10. ...read more.