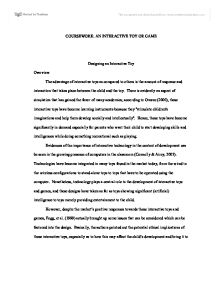 Research to aid designing an interactive toy of game for children. One of the most common interactive toys found in the market are the interactive plush toys. Popular brands are the Actimates Barney, Tickle Me Elmo,

COURSEWORK: AN INTERACTIVE TOY OR GAME Designing an Interactive Toy Overview The advantage of interactive toys as compared to others is the amount of response and interaction that takes place between the child and the toy. There is evidently an aspect of simulation that has gained the favor of many academics; according to Oravec (2000), these interactive toys have become learning instruments because they "stimulate children's imaginations and help them develop socially and intellectually". Hence, these toys have become significantly in demand especially for parents who want their child to start developing skills and intelligences while doing something recreational such as playing. Evidences of the importance of interactive technology in the context of development can be seen in the growing presence of computers in the classroom (Connolly & Airey, 2003). Technologies have become integrated in many toys found in the market today, from the wired to the wireless configurations to stand-alone toys to toys that have to be operated using the computer. Nonetheless, technology plays a central role in the development of interactive toys and games, and these designs have taken as far as toys showing significant (artificial) intelligence to toys merely providing entertainment to the child. However, despite the market's positive responses towards these interactive toys and games, Fogg, et al. (1999) actually brought up some issues that can be considered which can be factored into the design. ...read more.

These toys are designed in such a way that the child is stimulated by the different features of the toy such as portions that make sounds, portions that respond through touch (i.e. music), portions that enable the child to move objects. These toys can range from the simple interactive plush toys that hang from a arc to the more innovative types wherein the child can play with these toys while standing up or being set up in a stroller. Robotics and Virtual Pets Robots can be regarded as a significant step forward any interactive plush toy. Although it can be said that some interactive plush toys have robotic features, more recent interactive robots have demonstrated a significant amount of artificial intelligences. Fong, et al. (n.d.) mentioned that in the history of socially interactive robots, scientists mainly wanted to build these robots that can interact socially. From these ideas, scientific approaches emerged such as stigmergy and multi-robotics (Fong, et al., n.d.). Although robotics are too sophisticated to be used as toys, some manufacturers have actually come up with versions that people can play with. An example that is out in the market is Tekno the Robotic Puppy. Tekno can be considered as a very smart robot especially as it behaves like an 8 year-old puppy. Although Tekno does not respond to speech command, he can be traced using touch sensors. ...read more.

Hence, when a child steps on Red and then accidentally steps on Bird on the other side, the voice will say "Red" first after three seconds, and then followed by "Bird" in three seconds after the system resets from "Red". There are two reasons why each panel represents an audio and a word. Early learners will be able to appreciate to identify an image or color with a sound, and eventually, as they grow older, they can start to use the mat as an instrument when learning how to read. Parents can eventually use the mat to instruct the child such as, when the parent says "Step on the Green", the child will have to step on the right panel, wait for it, and find out if the right panel is Green or not. This toy will have a dimension of 4' x 4' with 16 panels. The panels are as follows: Colors: Blue, red, green, yellow, brown, orange, white, black Images: Bird, fish, sun, moon, house, dog, cat, man, woman The material is made of plush material that is safe for a child; it is ensured that the material is not an allergen and can be used by those who have respiratory problems. The mat can be operated by a rechargeable battery pack; the battery can last up to three hours of straight use, and can be directly charged through an attachable plug. Cleaning the mat does not require shampooing and can be cleaned by using a vacuum cleaner on low speed. ...read more.