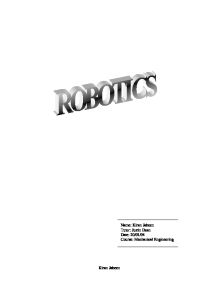 Name: Kiran Jabeen Tutor: Justin Dean Date: 20/01/04 Course: Mechanical Engineering A robot can be defined as a self-controlled device, which consists of electrical or mechanical units. A robot comes to mind, and has been fictionally known as a mobile device that is humanoid in appearance and has a metallic structure. At present robots are not very humanoid, instead they are machines that run continuously and respond automatically to a users respond, and can be controlled by a human operator even from a great distance. The word robot comes from the Czech story/play and means 'worker'. Most scientists define a robot being a machine that is operated by a computer and is able to many different jobs. Like many other machines robots are there to make our work easier, which they can do by moving materials, tools or other objects through programmed actions. A robot can be programmed to perform certain tasks, that can receive inputs, compute it, and then act out a desired behaviour or task as directed. It is a machine designed to execute one or more tasks repeatedly, with speed and precision. There are many different types of robots used to do many different types of tasks, but all these robots are narrowed down to their bare minimum and all have the same principal behind them. There are four main parts to a robot: the power supply, this provides all the electricity for the robot motors. There is the computer, which can also be known as the brain of the robot, and this controls what the robot does. There is the interface that links everything together. Many automated machines are often referred to as having hard automation and this is due to the fact of the machine having a fixed configuration that cannot easily be changed. ...read more.

Polar configuration: this can also be known as the spherical configuration and it combines with rational movement in both horizontal and vertical directions with only one single linear movement of the arm. These robots can be powered by electricity or it can be hydraulically driven. This type is used for lifting large loads. Articulated configuration: this is probably the most widely used. This is because of its flexibility in reaching any part of working envelope. The end effecter is almost impossible to visualize because of all its joints being rotary. The articulated configuration consists of several rigid arms connected together; this configuration can also be referred to as a jointed arm configuration. Some particular advantages include: " Good manoeuvrability " The ability to reach over obstructions " Easy access to its sides and overhead " Slim design " Fast operation SCARA configuration: this type is a combination of the cylindrical and revolute configuration. It is a three-linked arm that has two rotary joints providing movements of horizontal and vertical joints. The SCARA configuration was developed for assembly type operations. However they are now being used for welding, drilling and soldiering operations. These robots are very fast accurate. There are many points that have to be considered in a robot and all contribute to the way it works. These points also help the motivating influences of a robot and show how a robot has more advantage than a human. Accuracy is one of the most important terms in describing machine characteristics, which can also be referred to as precision, and is the measure of the difference between the programmed point or path, and also the actual point or path. Accuracy is also one of the most important factors of increasing product quality, the reason being that robots can be programmed ...read more.

Robots also do not make errors due to fatigue or lack of attention. " Very often robots are able to repay their entire capital, installation and training costs within less than 18 months. Robots are able to produce better grinding, welding and better tolerance than humans. To produce high quality parts, whether it is in grinding or welding there needs to be good speed of operation, which is also another advantage for robots. It is now easier to control accuracy and speed because of robots; it has been known that amore difficult welds that were impossible to produce have new been made possible due to robots. Increases productivity can mean that more work is completed on schedule and that schedules can be maintained. Because of robots utilisation of space and equipment is improved and this can result in savings to cover capital investment. Robots are able to work much faster at many tasks than humans can: for example, a human worker that does arc welding is able to maintain an average work rate of 0.50 metres per minute where as a robot arc welder is able to arc weld and maintain an average work rate of two metres per minute, under the same conditions. Robots can be found in a variety of locations, which include the automobile and manufacturing industries. And from what is written above we know that robots are able to do many different things from loading a machine to cutting glass. Although robots are mainly used for manufacturing they can perform other important jobs. They can be found in design, prototyping, fighting fires and medical applications. Robots can be used here on earth, under water and even in space, without the help of robots we would have very little knowledge of space and the underwater and also life would be very difficult and also very slow. ...read more.