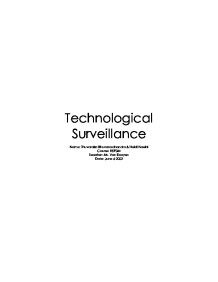 Technological Surveillance Name: Thuvaraka Bhuvanachandra & Heidi Naeini Course: HSP3M Teacher: Ms. Van Rooyen Date: June 6 2002 Technological Surveillance In an age where instant communication and technology provide easy and ready access to information, the society and the individual is caught between two very controversial principles- open information and privacy. The perceptions and expectations of privacy are rapidly changing as a result of current developments in surveillance technologies. The question is are these new surveillance technologies endangering the values and morals of our democratic society, the society we have worked for many centuries to achieve? According to Webster's dictionary, surveillance is defined as a "close kept watch over someone or something." Surveillance is not a new concept, and has been used every since the beginning of civilization. However, with the influence of technology, it has evolved. Policing agents no longer need to use methods of surveillance such as listening through walls, looking through windows and over fences, and even sitting in a suspect's garbage. Because of the ongoing development of new technology, policing agencies can hear, see and track almost everyone and everything at any given time. However, are the citizens of the Canadian society sacrificing their freedom and privacy for the purpose of security? ...read more.

This information is open to anyone who has access whether it is a borrowed library book, telephone bill, or a credit card purchase. However, how much is the society really sacrificing to allow law enforcers to effectively do their job? And how much are these laws helping criminals get away with crime? For example, neighbours of a suspicious new neighbour complain to the local police in Toronto of the possibility of growing marijuana in the home. The neighbours have practised surveillance in the simplest form possible by just observing the frequent but quick visits by the residents. However, when the police get involved, the observation becomes complicated and technology is used. With only the suspicion and word from neighbours, it is difficult to acquire a search warrant, so the police start their own more advanced form of surveillance. The police agents, from prior knowledge and experience, know that there would be bright lights inside the house, used that create heat. The agents use thermal imaging scanner to detect any form of heat inside the house. The agents conducted a scan of the house while parked outside and in just a few minutes the imager indicated that the roof over the garage was unusually hotter than those of the neighbours and other rooms inside the house. ...read more.

It has a very long range, and easily picks up on the difference between actual cameras and "false" ones such as television sets. The Pector indicates the presence of surveillance cameras by vibrating. Furthermore, it fits inside the shirt pocket or the back pocket and is very discreet. Although privacy is a right in our society, we need to realize that there are people who abuse this right. In the case of the marijuana, it is our personal opinion that it was reasonable for policing agencies to use surveillance. While the line is thin in cases where a good reason is needed to obtain a search warrant, policing agencies should be forced to obtain the warrant. Surveillance is a very important police tactic that helps to prevent crime and catch criminals. Without surveillance, there would be a lot more crime of larger magnitude. The only way that surveillance will be ethical is if policing agencies are policed. By making sure that these agencies follow strict codes, it will reduce the amount of unethical uses of surveillance technology. Although this would be the most ethical way to handle the issue, it is impossible to stop all uses of unethical surveillance. The continuous advancements in surveillance technology will continue to make it more difficult to regulate the use of surveillance, regardless of how much social control is implemented. ...read more.