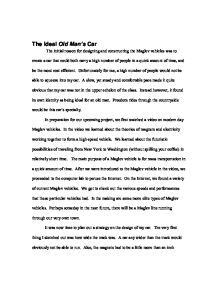 The Ideal Old Man's Car The initial reason for designing and constructing the Maglev vehicles was to create a car that could both carry a high number of people in a quick amount of time, and be the most cost efficient. Unfortunately for me, a high number of people would not be able to squeeze into my car. A slow, yet steady and comfortable pace made it quite obvious that my car was not in the upper echelon of the class. Instead however, it found its own identity as being ideal for an old man. Freedom rides through the countryside would be this car's specialty. In preparation for our upcoming project, we first watched a video on modern day Maglev vehicles. In the video we learned about the theories of magnets and electricity working together to form a high-speed vehicle. We learned about the futuristic possibilities of traveling from New York to Washington (without spilling your coffee) ...read more.

The plastic was easy to cut so that the contours of my base would match that of the car. Once I had my body and my base all set, I needed to install the ingredient that makes it all happen, the magnets. You could not just plug the magnets on the base in any sort of arrangement that you want. The magnets have to be placed on in rows approximately one inch apart. Also, the magnets (once they are placed on) must repel the force given off of the track so that the Maglev vehicle can float. After the magnets were carefully put on, it was time to install the motor system. The motor system consisted of one motor, two wires, and a propeller. The two wires would touch the side of the Maglev track and generate power inside the motor, which would turn the propeller. Once my motor system was installed, I was ready to test out my product on the track. ...read more.

A more efficient "gold" motor was placed on some of the other vehicles, and showed that they performed at a higher speed. Would my car have broken record speeds with this "gold" motor? Although my car would not have passed the expectations of the Maglev transportation theories, I did learn a lot about how electricity and magnets can work together. I learned that the Maglev is a mode of transportation for the future. A low (if not zero) pollution percentage, a Maglev would be ideal to the ozone. I found it amazing how the vehicles actually float down the track. The main problem for me was the weight factor. For some reason, I wasn't able to carry a space wide enough to fit any more than two passengers. Speculation could lead to bad magnet placement on the bottom. If I could do it again, I would design a car that distributes the weight more evenly throughout the base so I could fit more passengers. I would also look into purchasing the gold motor for higher velocity. I thought it was a fun project and I recommend it to future generations of classes. ...read more.