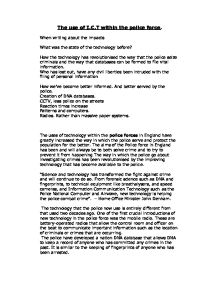 The use of I.C.T within the police force.

The use of I.C.T within the police force. When writing about the impacts What was the state of the technology before? How the technology has revolutionised the way that the police seize criminals and the way that databases can be formed to file vital information. Who has lost out, have any civil liberties been intruded with the filing of personal information How we've become better informed. And better served by the police. Creation of DNA databases. CCTV, less police on the streets Reaction times increase Patterns and computers. Radios. Rather than massive paper systems. The uses of technology within the police forces in England have greatly increased the way in which the police serve and protect the population for the better. The aims of the Police force in England has been and will always be to both solve crime and to try to prevent it from happening The way in which the police go about investigating crimes has been revolutionised by the improving technology that has become available to the police. ...read more.

It is similar to the keeping of fingerprints of anyone who has been arrested. Here are some interesting facts about the DNA Database: � FSS chief scientist Dr Bob Bramley is a leader in setting quality standards For the forensic science community as a whole and has responsibility for The National DNA Database as the custodian. � Dr Bramley is responsible for ensuring that all laboratories analyzing DNA Samples are reliable and compatible with other profiles on The National DNA Database. The FSS is not the only lab that provides samples for the Database. � The NDNAD now holds more than 2 million criminal justice samples - These are samples taken from suspects charged, reported, cautioned or Convicted for a record able offence. � Government investment of �187 million is funding a major expansion Programmed of the NDNAD. � DNA samples can be taken from anyone suspected of, charged with, Reported for, or convicted of a record able offence, and checked against Records on the NDNAD. ...read more.

These methods all contribute to making operations easier, faster and helps to lower costs. Also the safety has improved through the use of I.C.T. This is by such improvements of technology such as a system that allows train drivers to communicate with different stations and platforms and also to each other. This is useful for train drivers to report any faults with any of the tube lines. Trains can be informed of any accidents or delays and know whether to slow down speed up etc. This benefits both underground workers and commuters and has been made possible through the advances made in I.C.T. Another of the public sectors that has been impacted for the better by the use and implementation of I.C.T is the Health Sector. Hospitals are now much more able to help treat and cure people. This can be seen through some examples of existing technology that is currently being used. For example ...read more.