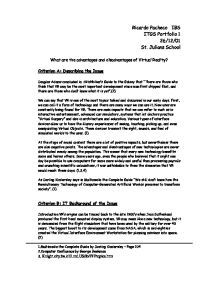 What are the advantages and disadvantages of Virtual Reality?

Ricardo Pacheco IBS ITGS Portfolio 1 26/12/01 St. Julians School What are the advantages and disadvantages of Virtual Reality? Criterion A: Describing the Issue Douglas Adams concluded in Hitchhiker's Guide to the Galaxy that "There are those who think that VR may be the most important development since man first chipped flint, and there are those who don't know what it is yet".(2) We can say that VR is one of the most topics talked and discussed in our early days. First, we can call it a form of technology and there are many ways we can use it. New uses are constantly being found for VR. There are main impacts that we can refer to such as in interactive entertainment, advanced car simulators, systems that let doctors practice "Virtual Surgery" and also in architecture and education. Various types of interface devices allow us to have the illusory experiences of seeing, touching, picking up, and even manipulating Virtual Objects. These devices transmit the sight, sounds, and feel of simulated worlds to the user. (1) At the stage of social context there are a lot of positive impacts, but nevertheless there are also negative points. The advantages and disadvantages of new technologies are never distributed evenly among the population. This means that every new technology benefits some and harms others. ...read more.

the giant Microsoft Company with implications in the economy of the U.S.A. The political decisions in the level of governments have supported the development of the technology. The impact of new technologies have made a revolution in terms of worldwide information, enterprise management, how to deal with education, politically and we can see the change of the world every day with our eyes. Every technology has a philosophy, which is given expression in how the technology makes people use their minds, in what it makes us do with our bodies, in how it codifies the work, in which of our senses it amplifies, in which of our emotional and intellectual tendencies it disregards. VR provides a cheap and a safe way of simulating environments that would be either expensive or dangerous to replicate in real life. In recent years VR devices have improved a lot because of new advances in technology. Computers have become more powerful and have a higher memory capacity, they are smaller and they cost much less. The information has to be quickly available but still now there are some that can't experience the fantastic V.World. As it is said in The Social Impact of Computers (page 495,496) by Richard S. Rosenberg "We live in age of serious contradictions. Technological development is accelerating, and without doubt the benefits to society have been massive and persuasive. ...read more.

For example, in medicine they have developed the "Virtual Surgery", in architecture they have made a way of seeing constructions virtually without doing it in reality. Finally, in education they tried to make V.Schools, this means that the student doesn't have to attend school; they just have to stay online and have lessons through the computer. Another major problem is that people can become addicted to the use of computers and VR stuff, so they start forgetting the other normal things and don't socialize more with other people. If the technology continues to develop at this rate there would be much more man without work because the machines do the work for them. In term of laws it is still needed to establish legal frameworks in order to protect the people in many ways. Now there is a new economic phase to correspond to the costumer expectations, we can make all kind of business through network and this is called the "e-business". "Barnes & Nobles" is one of the biggest and popular library known everywhere but recently with this new phase a big and successful enterprise was born, called "Amazon.com". This is considered the biggest V.Library of our planet. We are living a new era with a new culture, paradigms which needs a revolution in our mentalities and in the way of doing things. "VR is the hot buzz these days in both high technology and underground pop culture...high-tech, real life adventure story". ...read more.