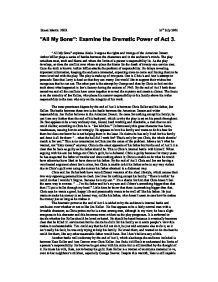 Susan Martin 10KR 16th July 2001 "All My Sons": Examine the Dramatic Power of Act 3. "All My Sons" explores ideals. It argues the rights and wrongs of the American Dream. Arthur Miller plays a series of battles between the characters and in the audience's minds. The play considers trust, truth and blame and where the limits of a person's responsibility lie. As the play develops, so does the conflict over where to place the blame for the death of twenty-one service men. Once the truth is known Arthur Miller attacks the problem of responsibility. He delays revealing important information, keeping the audience interested, expecting more to come and forcing them to be more involved with the play. The play is made up of two parts. One is Chris's and Ann's attempt to persuade Kate that Larry is dead so that they can marry. Joe would like to support their wishes but recognises that he can not. The other part is the attempt by George and then by Chris to find out the truth about what happened in Joe's factory during the autumn of 1943. By the end of Act 3 both these narratives and all the conflicts have come together to reveal the mystery and create a climax. The focus is on the morality of Joe Keller, who places his narrow responsibility to his family above his wider responsibility to the men who rely on the integrity of his work. The most prominent dispute by the end of Act 2 is between Chris Keller and his father, Joe Keller. The battle between these two is the battle between the American Dream and wider responsibility. Joe Keller believes in the American Dream. He cares for nothing except his family; he can't see any further than the end of his backyard, which is why the play is set on his porch throughout. He first appears to be a very ordinary man, decent, hard working and charitable, a man that no one could dislike; according to Chris he is "Joe McGuts." ...read more.

And you spend your life groping for it, but once it's out it never lights again...He probably just wanted to be alone to watch his star go out." Jim is idealistic, like Chris, but was persuaded by Sue not to live for what he wanted, but for what she wanted: Kate is pining for Chris to come back, Jim objects: "I wish he wouldn't, Kate. One year I simply took off, went to New Orleans; for two months I lived on bananas and milk, and studied a certain disease." This was Jim's ideal world, spoiled by Sue: "...she came and she cried. And I went back home with her." He understands that he made sacrifices and now lives in the "usual darkness," not what he wanted to do and therefore he's not the man he wanted to be. All he's ended up being is a "good husband; Chris is a good son - he'll come back." Jim has not lived the life he wanted to live and could have lived if he hadn't been forced to make compromises. This conversation Jim holds with Kate reminds the audience of what the play is about: the battles of ideals. Joe Keller's false innocence begins to weaken at he start of Act 3. His confusion turns to panic as he realises he is losing his family; "I thought I had a family here. What happened to my family?" he realises he is losing his life and his family. The one thing he has lived for is falling through his fingers. He is struggling to grasp the beliefs of Chris, panicking, because he is unable to feel guilt. The latest clash between Joe Keller and Kate Keller acts as a rehearsal for what is about to happen when Chris enters, adding to the tension. Joe is still claiming that his family means the world to him but he is still unable to see that murdering 21 servicemen can't be accounted for by the love he has for his family. ...read more.

Don't take it on yourself. Forget now. Live." This is Kate's message just to "live," similar to Joe's view on life that is to not worry about anything else and just live for what you want and your family; the whole point of the play: the American Dream. His parents have turned Chris into one of them, he has been made "practical" by the crime of his father. There is doubt over whether or not the audience admires Joe Keller for committing suicide; in my pinion he has just chosen the easy option, the easy way out. He is as usual not prepared to face up to the truth. On the day Steve Dever phoned hin about he faulty cylinder parts he claimed to ill, not wishing to face up to the truth. I don't respect him for killing himself, he is simply avoiding going to prison. Joe was proud of the fact that he killed 21 servicemen for his family, but has now later realised that both his sons especially Larry would rather go without he money and have the satisfaction of a clear conscience. He says he is guilty for this but I don't believe he is. He is yet again lying, averting the truth, just making the one son he has left feel even guiltier because of his father's crime, which the reason Chris felt guilty in the first place, Joe is just helping to add to this guilt. I don't believe that Joe Keller was a decent man but just an evader of the truth and his suicide leaves us with proof of this. The query over whether or not to admire Joe Keller for killing himself could leave the audience very undecided. It keeps them intrigued and responsive with regard to what they have just seen. The audience would also be asking the question which Joe's death and Chris's guilt brings up concerning the limits to a person's responsibility. ...read more.