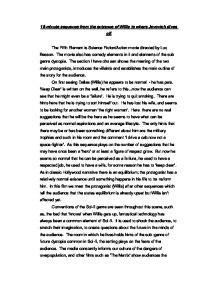 15-minute sequence from the entrance of Willis to where Jovovich dives off - The Fifth Element - Science Fiction/Action movie directed by Luc Besson.

15-minute sequence from the entrance of Willis to where Jovovich dives off. The Fifth Element is Science Fiction/Action movie directed by Luc Besson. The movie also has comedy elements in it and elements of the sub genre dystopia. The section I have chosen shows the meeting of the two main protagonists, introduces the villain/s and establishes the main outline of the story for the audience. On first seeing Dallas (Willis) he appears to be normal - he has pets. 'Keep Clear' is written on the wall, he refers to this...now the audience can see that he might even be a 'failure'. He is trying to quit smoking. There are hints here that he is trying to sort himself out. He has lost his wife, and seems to be looking for another woman 'the right woman'. Here there are no real suggestions that he will be the hero as he seems to have what can be perceived as normal aspirations and an average lifestyle. The only hints that there may be or has been something different about him are the military trophies and such in his room and the comment 'I drive a cab now not a space-fighter'. As this sequence plays on the number of suggestions that he may have once been a 'hero' or at least a figure of respect grow. But now he seems so normal that he can be perceived as a failure, he used to have a respected job, he used to have a wife, for some reason he has to 'keep clear'. ...read more.

futuristic settings, clothing etc, and they also expect certain things from the narrative because of this. Generally the audience will expect an action hero who will save the world. The dice and hanging air-freshener in the cab provide the audience with something that is common between now and the future (common cabs have dice in them). By putting those small items in the cab we not only see how normal Dallas's life seems to be (adding to the balance of the equilibrium) we see a craze of today in the future dystopia - showing the strong possibility that this could be the future. A narrative style used in Sci-fi is the fact that some force/ person is trying to take over the world! A part of this style is demonstrated when we cut to the next scene. Here a very common aspect of Sci-fi appears - the spaceship. An image of a huge space ship can be seen, it is surreal unlike anything the audience has seen before. This image and the borders around our planet create the futuristic Sci-fi idea that earth isn't the only 'living planet' in the universe. The camera shows the inside of the ship...we see an alien figure seen earlier in the film. A space battle then begins, a sight often seen in Sci-fi movies. The mise-en-scene and setting in the spaceships is used to show how evil and uncivilised the other aliens are, there ships are dark and small and they laugh as they attack the other ship. ...read more.

The bright lights in the corridor leading up to the scientific area impose a feeling of inferiority in the audience, similar to that we feel to doctors in well lit hospitals. When she is revived, Leeloo (fifth element) is naked and the thermal bandages don't cover much! The bandages are white - a symbol of innocence, this immediately proposes her as the 'princess' role in the film...she becomes a s*x object to the male audience and a physical role model the female audience. Therefore, when she forcefully escapes gender roles in the film are blurred (she isn't the conventional love/s*x-object of the film), the female audience feel empowered and it is suggested that Dallas isn't the only hero. The police in the sequence are portrayed as being quite idiotic, stating the obvious for example. Their uniform makes them seem slow and unable to function properly in the eyes of the audience, this makes Leeloo seem more agile in contrast. When Leeloo is outside the shots are edited between her face and the city, her expression is one of terror and disgust, this technique is used so that we feel that same way. As an audience we become scared by what has happened to earth as we see a city similar to Ridley Scott's 'Bladerunner', again an example of future dystopia. When she dives off the audience are left confused and on edge, we wonder if she will die. When she lands in Dallas's car his equilibrium is upset, and the main protagonists are introduced, making the audience excited at the possibilities of the ever common romantic interest. ...read more.