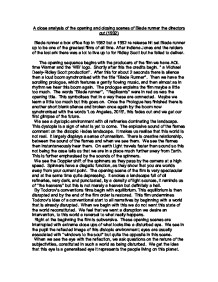 A close analysis of the opening and closing scenes of Blade runner the directors cut (1992).

A close analysis of the opening and closing scenes of Blade runner the directors cut (1992) Blade runner a box office flop in 1982 but a 1992 re release hit set Blade runner up to be one of the greatest films of all time. After Indiana Jones and the raiders of the lost ark there was a lot to live up to for Ridley Scott but he failed to deliver. The opening sequence begins with the producers of the film we have AOL time Warner and the 'WB' logo. Shortly after this the credits begin. '' a Michael Deely-Ridley Scott production''. After this for about 2 seconds there is silence then a loud boom synchronised with the title ''Blade Runner''. Then we have the scrolling prologue, which features a gently flowing music, and then almost as in rhythm we hear this boom again. The prologue explains the film maybe a little too much. The words ''Blade runner'', ''Replicants'' were in red as was the opening title. This symbolises that in a way these are connected. Maybe we learn a little too much but this goes on. ...read more.

In narrative the goodness is related to the protagonist, evil is associated with the villain. The major conflict in the text is mutually between these two opposites. Blade runner indicated the following binary oppositions: Human- inhuman, organic-inorganic, reality-illusion, Death-life. For the replicants their humanity is an illusion. Death is the final state of the replicants and life is with Deckard. In narrative the positive side of opposition is associated with good and vice versa. In Blade Runner this association is ambiguous. We are made to consider in greater depth about the nature of humanity, ''in what does it consist'' In so many narratives the villain is presented as the doppelganger. In Blade runner both seem to be presented in a doppelganger of Deckard. There are a number of ways this association is made. The Ontological status of Deckard is indeterminate because he may be a replicant; there are many small details in the film to suggest this. He has little memory of his child hood and his dream about the unicorn. There is also some evidence of this in the textual analysis. He sympathises with the replicants, he doesn't want to let Rachel know she is a replicant, his reluctance to kill replicants play a part in this. ...read more.

The unicorn sequence can be looked at from a different way. The unicorn is a mythical beast that can be tamed by a virgin, this dream came when he was falling in love with Rachel. At the End Gaff could be saying that Deckard now has a meaning in life through is love and commitment for Rachel. ''blow the Gaff'' means to reveal secrets about the world, as gaff does about the characters. At the end Deckard picks up the unicorn and Gaff's words come back to him, ''too bad she wont live, but then again who does'', he acknowledges these words as we see him nod. He accepts these words with commitment, he knows that in the end we all have to die so the little time we have should be spent well. What the film is saying is to be human you must be able to empathise with others, who are different in the case the replicants. Deckard's humanisation, occurs in the final scenes with batty, ''now you know to live in fear''. Deckard goes into the lift there is a small fade out then another boom the words 'a Ridley Scott production'. ...read more.