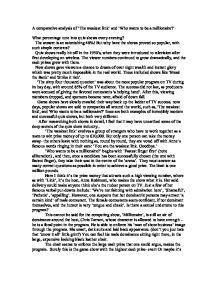 A comparative analysis of 'The weakest link' and 'Who wants to be a millionaire?'

A comparative analysis of 'The weakest link' and 'Who wants to be a millionaire?' What percentage tune into quiz shows every evening? The answer is an astonishing 48%! But why have the shows proved so popular, with such simple contexts? Quiz shows really hit off in the 1950's, when they were introduced to television after first developing on wireless. The viewer numbers continued to grow dramatically, and the cash prizes grew with them. New shows gave viewers a chance to dream of over night wealth and instant glory which was pretty much impossible in the real world. These included shows like 'Break the Bank' and 'Strike it rich'. 'The sixty four thousand question' was about the most popular program on TV during its hay day, with around 85% of the TV audience. The success did not last, as producers were accused of giving the favored contestants 'a helping hand'. After this, viewing members dropped, and sponsors became rarer, afraid of down fall. Game shows have slowly crawled their way back up the ladder of TV success. ...read more.

Her acid delivery could make anyone think she's the rudest person on TV. Just a few of her famous verbal put-downs include: 'We're not fainting with admiration here', 'Shameful', 'Pathetic', 'appalling'. However, one suspects that her dominatrix persona may attract 'a certain kind' of male contestant. The female contestants seem confidant, if not dominant themselves, and the humor is very 'tongue and cheek'. Is there a s****l undertone to this program? This cannot be said for the competing show, 'Millionaire', is still an air of dominance around the host, Chris Tarrant, whose character is allowed to have strength - he is a focal point in the program. He is able to enforce his 'man of show business' image through the program. His smart, dark suits and laid back appearance. (don't you just hate that 'know it all' little grin?) You can feel his male dominance sitting right there, in the large, expensive looking black leather chair. The chair seems to enforce the large cash prize that one could argue, makes the program. ...read more.

(Obviously to enforce the 'win big money' approach) one gets the feeling that the spherical platform is not to emphasize a futuristic approach, but to give us the feeling of the roman arena, with the two gladiators, head to head. However, the show is very focused around Chris Tarrant. It is filmed in a way that the audience is fixed on the expressions of either Chris or the contestant. On the other hand, Link regularly concentrates on all nine contestants and Anne from a little distance, giving the viewers time to take in the scenery. On these shots, the camera is always moving to keep the attention of the audience. The lighting too, is constantly changing, depending on the mood of the moment. As the contestants choose the fait of their team members/ rivals, (a tense moment) the spot lights flash red, which is in contrast to their general colour, blue. This is all an insight into the works of the quiz show. Programs with original ideas, such as the ones mentioned, seem to be the most popular in today's world of TV viewing. ...read more.