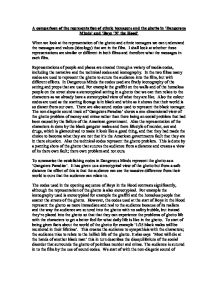 A comparison of the representation of ethnic teenagers and the ghetto in 'Dangerous Minds' and 'Boyz 'N' the Hood' When we look at the representation of the ghetto and ethnic teenagers we can understand the messages and values (ideology) that are in the film. I shall look at whether these representations are similar or different in both films and therefore what the messages in each film. Representations of people and places are created through a variety of media codes, including the narrative and the technical codes and iconography. In the two films many codes are used to represent the ghetto to suture the audience into the film, but with different effects. In Dangerous Minds the codes used are firstly iconography of the setting and props that are used. For example the graffiti on the walls and of the homeless people on the street show a stereotypical setting in a ghetto that we can then relate to the characters as we already have a stereotypical view of what they are like. Also the colour codes are used as the starting footage is in black and white as it shows that their world is so distant from our own. There are also sound codes used to represent the black teenager. ...read more.

Also the symbolic code of the stop sign being red emphasizes the bloodshed that litters the ghetto. The opening of the two films, although using stereotypical iconography of the ghetto differ in the way suture the audience. This is because the institution's/director's intention in Dangerous Minds is to create a large mass audience and the institution's/director's intention in Boyz in the Hood is to emphasis the problems and the poor quality of life that black people have when living in such a ghetto like the one featured. In Dangerous Minds character functions are used to suture the white audience into seeing the black ghetto world by the use of a heroine. However our perspective is from that of a white female. It has done this, as it is a high concept film. It has a female as a heroine to produce a female audience. Also the actor herself 'Michelle Pfeiffer' connotes s*x appeal which would create a much larger male audience. Another reason a white female has been used is to suture the audience into the film, as they would see it from a white perspective. However, in Boyz in the Hood, the 'hero' is form within the black community. Fureus, Tre's father, guides his son through his teenage life to make the right and true decisions and become a man. ...read more.

This was done because of the director. I say this as the director was black and showed his views of real ghetto life and that when living in a ghetto nothing is ever perfect. In conclusion it is clear that both films have represented ethnic teenagers and the ghetto in quite different ways. An example of this is the contrast of ideology as Dangerous Minds seems to put the blame on the black individuals but Boyz in the Hood points the blame at the American government and there failure to help. The reason for these differences is due to the institution and directors. Dangerous Minds is a Hollywood major, it was created to get a large mass audience, and by doing this it used almost false ideology to create a wider interest in the film. On the other hand there's Boyz in the Hood that was directed by a black director. I prefer the film Boyz in the Hood because as I believe it is more effective in its ideology as it uses a realistic view of the ghetto world. It doesn't use a happy Hollywood ending and by doing this it creates the audience to have more feeling towards the characters and we start to relate with them as we feel sorry for the way in which they like compared to our trouble free life's. Prefer the ideology as it is describing the ghetto as being a trap and vicious circle or murder and drugs. ...read more.