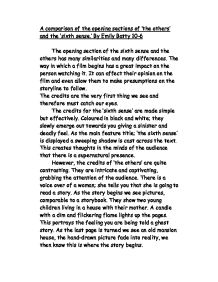 A comparison of the opening sections of 'the others' and the 'sixth sense.'

A comparison of the opening sections of 'the others' and the 'sixth sense.' By Emily Batty 10-6 The opening section of the sixth sense and the others has many similarities and many differences. The way in which a film begins has a great impact on the person watching it. It can affect their opinion on the film and even allow them to make presumptions on the storyline to follow. The credits are the very first thing we see and therefore must catch our eyes. The credits for the 'sixth sense' are made simple but effectively. Coloured in black and white; they slowly emerge out towards you giving a sinister and deadly feel. As the main feature title; 'the sixth sense' is displayed a sweeping shadow is cast across the text. This creates thoughts in the minds of the audience that there is a supernatural presence. However, the credits of 'the others' are quite contrasting. They are intricate and captivating, grabbing the attention of the audience. There is a voice over of a woman; she tells you that she is going to read a story. As the story begins we see pictures, comparable to a storybook. ...read more.

This gives the audience a better feel of his emotions and struggles and it also makes you feel as if you're in his shoes. When there is a focus on the main characters, sometimes camera shots were taken from behind objects. This gives the feeling that there is an intruder and they are being watched, this develops edginess and apprehension. The camera movement and angles in 'the others' are used carefully to ensure the correct impact is made on its audience. Gentle, sweeping movement of the camera in the credits helped to emphasize the fact you were looking at a story book. As the page was turned, the camera moved too. When we are fist introduced to the main characters, the camera circled around them. This gives the audience the perception that there is more to them than we can see. In the sixth sense, colour and lighting is quite a focal point. The intensity of the light symbolises different states of mind and the security of the characters. When the light is dull we acknowledge that there is danger around where as when there is bright light, safety is presumed. ...read more.

Without the actors in a film, a plot and script could not be made into a reality. The actors in 'The others,' play the parts of their characters very well. Nicole Kidman, cast as the mother, has a very disturbed mind and the intricate detail put into her character makes her seem the perfect person to play the main part in a horror film. She can make the audience feel terrified and in emotional times we can also sympathise for her. There is also a great deal of humour from the young boy 'Nicholas,' he is very warm-hearted and can sometimes be seen as comical. The two main characters of the 'sixth sense' show their feelings through their speaking and just as well through their actions. Terror can be portrayed by them running away frantically or moving gingerly in the discovery of danger. Finally, all of the various factors which have been compared from the two films illustrate the way in which quite diverse plots can have the same impact creating trepidation, shock and the ultimate feeling of fear. Film producers can create all of these sensations using different techniques to provoke an appropriate response, hence maintaining the audience's attention. ...read more.