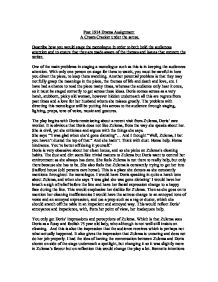 A Cream Cracker under the settee - Describe how you would stage the monologue in order to both hold the audiences attention and to ensure that they are made aware of the themes and issues that concern the writer.

Post 1914 Drama Assignment A Cream Cracker under the settee. Describe how you would stage the monologue in order to both hold the audiences attention and to ensure that they are made aware of the themes and issues that concern the writer. One of the main problems in staging a monologue such as this is in keeping the audiences attention. With only one person on stage for them to watch, you must be careful in how you direct the piece, to keep them watching. Another potential problem is that they may not fully grasp the meanings in the piece, the themes of life and death and love, etc. I have had a chance to read the piece many times, whereas the audience only hear it once, so it must be staged correctly to get across these ideas. Doris comes across as a very harsh, stubborn, picky old woman, however hidden underneath all this are regrets from past times and a love for her husband whom she misses greatly. The problem with directing this monologue will be putting this across to the audience through staging, lighting, props, tone of voice, music and gestures. The play begins with Doris reminiscing about a recent visit from Zulema, Doris' care worker. It is obvious that Doris does not like Zulema, from the way she speaks about her. She is civil, yet she criticises and argues with the things she says. ...read more.

He wasn't dirty, little thing.' The way the midwife acts here is probably linked to why Doris dislikes the care service so much. She is tactless and treats the baby like a thing and Doris probably partially blames the care service for what happened. She is worried that if she goes to Stafford house she will end up the same way as the baby. Uncared for properly, alone and dead. Here I would have Doris sounding angry and confused as she spoke her lines. To show she was angry about how the midwife treated the baby and confused about what had happened with the baby and why it had happened. Also I would have her sounding upset and wistful, with a similar sort of expression on her face, to convey to the audience her sadness about her lost child and how she never really overcame it. Whilst Doris was talking in this scene I would have the voices of the midwife and Wilfred echoing the conversation softly in the background. This would give the scene a more powerful effect than the others showing that this was a particularly important moment in Doris' life and a matter that deeply affected her. It is ironic that Doris views Zulema's cleaning as inadequate. Doris sees Zulema as slovenly compared to her standards, which she believes to be normal and so she tries to do her own cleaning. ...read more.

As my audience was leaving the theatre, I would like them to be thinking about Doris. I would like them to be feeling as I was feeling after when I first finished reading the story. A mixture of happy and sad feelings. Sad because she died alone and unhappy, when she could've had a better chance at the care home. Also sad because perhaps people didn't take enough care of her. But also a slightly happier feeling because at least she got to choose how she died, she could have saved herself if she had wanted to. She had said continuously how she never wanted to be put in a home and also how she was unhappy with the care she received and this way her problems were solved, so in a way she got what she wanted. I would use Techniques such as facial expressions and tone of voice mainly in this piece because its hard to use a lot of stage and directing techniques in a monologue, but I personally think you can convey a lot with your tone of voice and facial expressions. I also use things such as still frames under spotlights, to help the audience re-live some of Doris' memories, and echoing voices, to exaggerate and emphasize some of the conversations. Overall I hope the audience would leave the play thinking about the themes and issues covered, thinking about both the positive and negative points. ...read more.