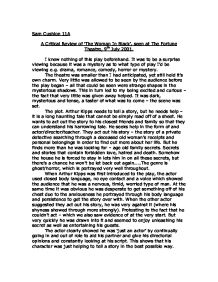 Sam Cushion 11A A Critical Review of 'The Woman In Black', seen at The Fortune Theatre, 9th July 2001. I knew nothing of this play beforehand. It was to be a surprise viewing because it was a mystery as to what type of play I'd be viewing e.g. drama, romance, comedy, horror or mystery. The theatre was smaller than I had anticipated, yet still held it's own charm. Very little was allowed to be seen by the audience before the play began - all that could be seen were strange shapes in the mysterious shadows. This in turn led to my being excited and curious - the fact that very little was given away helped. It was dark, mysterious and tense, a taster of what was to come - the scene was set. The plot. Arthur Kipps needs to tell a story, but he needs help - it is a long haunting tale that cannot be simply read off of a sheet. ...read more.

At the same time it was obvious he was desperate to get something off of his chest due to the anxiousness he portrayed through his body language and persistence to get the story over with. When the other actor suggested they act out his story, he was very against it (where his shyness showed through more strongly). Protesting to the fact that he couldn't act - which we also saw evidence of at the very start. But very quickly he was drawn into it and seemed to enjoy unleashing his secret as well as entertaining his guests. The actor clearly showed he was 'just an actor' by continually going in and out of role to aid his partner and give his directorial opinions and constantly looking at his script. This shows that his character was just helping to tell a story in the best possible way. The amount of dramatic tension which was created by the actors and sound and lighting effects was outstanding as there were ...read more.

I was brought close to tears at one point when the dog is drowning in a marsh and the young man saves him. It was like the dog was real, just invisible, not fake. Just as with the horse and carriage, they way they moved - bopped up and down, swayed side to side and the realistic sound effects worked marvelously. They were incorporated very well. They were loud, obvious and at times extremely harrowing, for example the shrill scream of the woman in black. I enjoyed the play very much. It reached out to me - I experienced feelings such as fear, anxiety and pity, to name but a few. I didn't even notice that there were just two actors on stage throughout the whole play, until afterwards when I thought back to it. This, to me, indicates a great achievement - of great acting. This play had the potential to be boring - but the actors, characters and storyline were superb. I would definitely recommend the play for an entertaining evening out. ...read more.