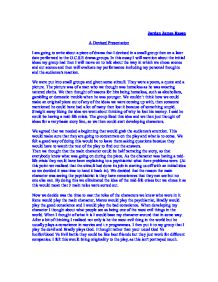 Jordan James Rason A Devised Presentation I am going to write about a piece of drama that I devised in a small group then on a later date performed to the G.C.S.E drama groups. In this essay I will mention about the initial ideas my group had then I will move on to talk about the way in which we chose scenes and cut scenes and then will evaluate my performance including my personal thoughts and the audience's reaction. We were put into small groups and given some stimuli. They were a poem, a quote and a picture. The picture was of a man who we thought was homeless as he was wearing tattered cloths. We then thought of reasons for him being homeless, such as alcoholism, gambling or domestic trouble when he was younger. We couldn't think how we could make an original piece out of any of the ideas we were coming up with, then someone mentioned he could have had a lot of many then lost it because of something stupid. Straight away liking the idea we went about thinking of why he lost his money. I said he could be having a mid-life crisis. The group liked this idea and we then just thought of ideas for a very basic story line, so we then could start developing characters. ...read more.

The group decided on what they thought the first scene should be and what should happen during it, so that night I typed it up, brought it in the next day and made sure that everybody was happy with it. Once we had got every scene done, we went back to the beginning and scene by scene we worked out about our staging and the in which we were going to use the lights. We did this as we felt this could gain us a lot of marks, or lose us a lot if we did not do it properly. We would do this by each person individually would leave the play and sit where the audience would sit, they would then tell us what they thought. After we felt we had got it to a high standard we asked Miss Okbay to see our play and tell us not only what she thought but how we could improve it, as she knew what the examiner will be looking for. I feel that the devising part of our play went well as we came up with an original idea that mixed the comedy and drama genres. We all contributed well, I feel that I came up with good ideas that furthered our piece, especially in the initial phase where I thought of most of the main themes and what the actual play would be about. ...read more.

This added diversity to our piece as not many groups added an abstract piece to there play. This scene was very successful in doing its job, which was to make you feel sorry for Rene but at the same time be quite scared of her. I feel that the piece was appreciated by everybody, which I personally think makes it a good play. There were a few mistakes that I have stated and we had a problem with people not being in lessons as this would limit the amount of work we could do. I think that my acting in the play was of a very high standard as I remembered all my lines and developed my character very well. If I could add one scene it would have been a scene to develop and show the relationship between God and lucifer as it could have brought some very comical situations into the play or it could have given me and Bradly a situation to show some different emotions. I enjoyed planning, developing and showing the play but the thing I enjoyed most was being able to do some directing. I liked deciding how the lights should be, how people should face and helping people to develop their characters because if the scene was effective or a character was portrayed well , you can say that, that's your work and be proud of it. ...read more.